As the Australian team puts its all into the 2016 Olympic Games, we speak to one athlete making his Olympic debut in Rio.

What does it take to become an Olympian?

According to 26-year-old Hayder Shkara, determination and a lot of bloody hard work.

The Taekwondo champion is making his debut at the 2016 Rio Olympic Games this year, joining his teammates as a competitor for the first time.

Shkara began learning Taekwondo at the age of eight. By thirteen, he had his heart and mind set on the Olympics.

But his success story is not without its tribulations. Four years ago, Shkara was in a very different place.

вЂњIt was a long term goal for me to go to 2012 London,вЂќ Shkara says. вЂњNot qualifying was a huge, huge blow to me.вЂќ

Shkara just missed out on qualifying for the 2012 team when he lost the finals to New ZealandвЂ™s Vaughn Scott – an experience that nearly led him to leave the game.

вЂњIвЂ™d been doing sport for a long time, and I just started to work in the legal field. I was making some money, so it was kind of a good time for me to stop,вЂќ Shkara said of his dilemma at the time.

вЂњBut I spoke with my coach, Ali Khalil, and he was like, you can work for the rest of your life. Just give this another four years and we can achieve something great here.вЂќ

It took going to London as a training partner to long-time friend Safwan Khalil, who was competing in the Olympics for the first time that year, to convince him that he should remain in the sport, at least until he achieved his goal.

вЂњThere were a lot of times throughout the trip where I was hurting a lot inside and it was painful to be thereвЂ¦ So many times youвЂ™re so upset and disappointed that itвЂ™s not actually you competing on the mats,вЂќ Shkara says.

вЂњBut seeing the atmosphere and being a part of the team and going to the competition, if I didnвЂ™t do that, if I wasnвЂ™t selected as a training partner, I wouldnвЂ™t have had the motivation to continue for another four years. It was only after seeing that and seeing how amazing that was that I committed to myself вЂ“ вЂIвЂ™ve got to do another four years, push it for another four years or IвЂ™ll regret it for the rest of my life’.вЂќ

And with that decision made, Shkara came home and made some big changes.

вЂњBefore 2012 I was involved in a lot of different things and I was very diversified. I was doing my university degree вЂ“ which was the least of my concerns in all honesty вЂ“ I was running my own Taekwondo school, I was training full time and I was working as a paralegal, volunteering and doing a lot of charity work and running programs for a youth centre,вЂќ he says.

вЂњBut after 2012, I came to realise that I shouldnвЂ™t be doing so many things and IвЂ™ve really got to cut things off in order to focus in and to achieve this goal. So I did that; I started shredding the excess weight I guess, got rid of everything.вЂќ

Shkara stepped down from community projects, finished his combined university degree in journalism and law and sold his Taekwondo school.

Luckily for him, he says, the partners at the law firm in which he practised as a solicitor took his Olympic dream to heart and became some of ShkaraвЂ™s biggest supporters.

вЂњOnce it got past 5 oвЂ™clock, 5.15pm, theyвЂ™d say go home, you gotta go train, and they genuinely wanted me to go to the Olympics.вЂќ

By the beginning of 2015, Shkara had quit full-time work, and committed to a regime of full-time training.

вЂњI train twice a day, strength and conditioning in the morning and then in the evening we do a Taekwondo drill, kicking, fighting, sometimes conditioning as well, a bunch of things,вЂќ he says.

вЂњThe closer you get to the Olympics, the less you train – itвЂ™s a tapering off period. What happens is we let the body rest more, we do less sessions, so the body gets more time to recover, so itвЂ™s not traumatised, so itвЂ™s at 100% every session.вЂќ 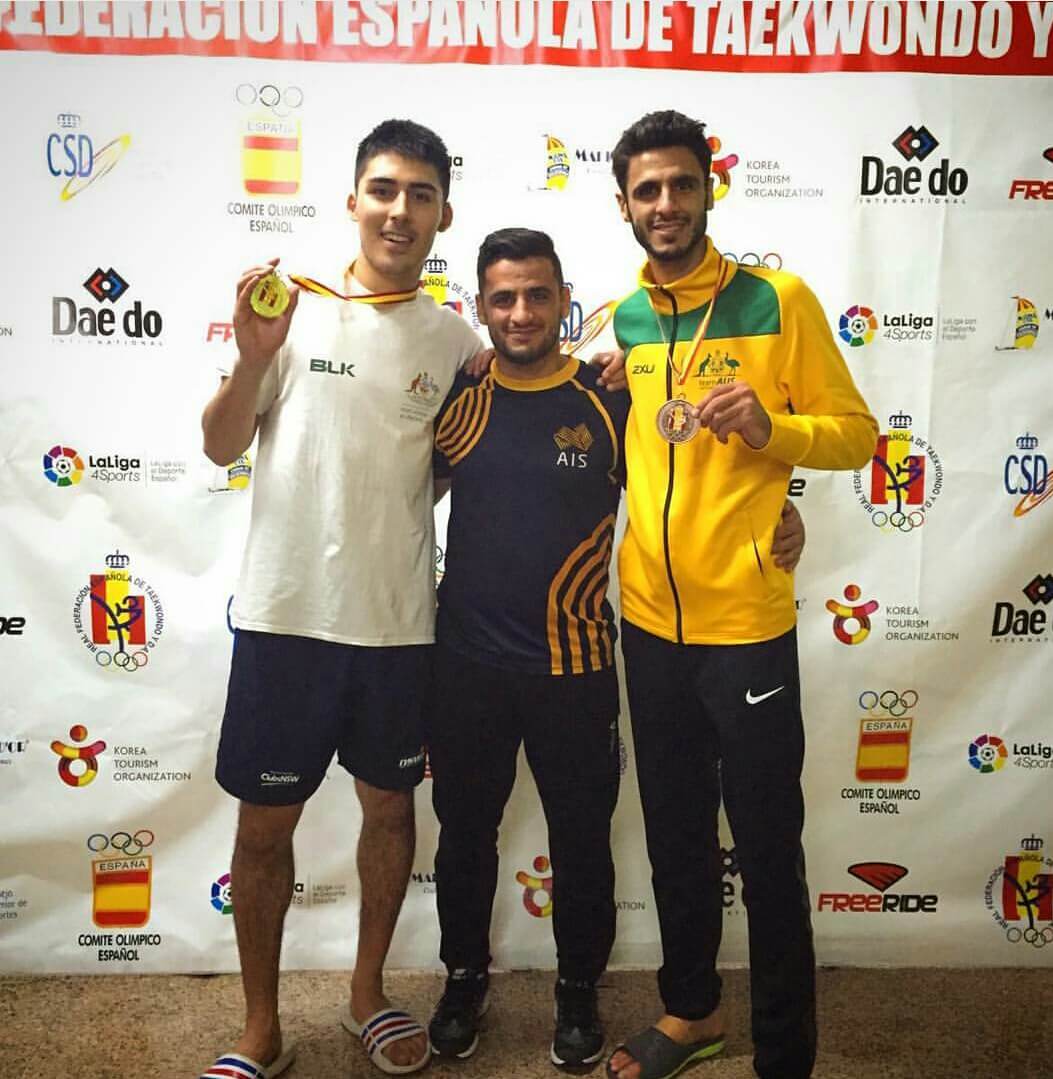 Shkara says his parents have been a huge support and huge influence in his journey to the Olympics.

вЂњI had to move back home in order to do keep training full time as I couldnвЂ™t support myself. They love it – theyвЂ™re over the moon!вЂќ

Shkara comes from a mixed cultural background; his mother is Japanese and his father is Iraqi in origin.

вЂњI think my mum instilled a lot of her cultural values in me, like the work ethic – she works really hard – and in terms of education and support, just to be disciplined and consistent and keep doing what you want to do even if you donвЂ™t feel it at the time.вЂќ

According to Shkara, that discipline in his dogged pursuit of his goals is a key factor in how he landed in Rio.

вЂњI wasnвЂ™t athletically.gif"text-align:justify;"> But Shkara has more than a medal in mind.

вЂњThe Iraqi community here in Sydney, theyвЂ™re obviously very disadvantaged, coming from a war-torn country, and a lot of the time the focus for those kind of refugees is on getting jobs and making money вЂ“ which of course is important. But IвЂ™m trying to evoke a greater sense of community вЂ“ I guess, a national spirit.вЂќ

It was a motivation that weighed on his mind when he made the decision to withdraw from the community work and youth centre projects in which he was involved prior to taking on full-time training.

вЂњIn all honesty, it just came to a point where I said to myself, youвЂ™ve got to put yourself first and just be selfish for the next four years. The way I justified it to myself was: if you achieve this you can come back, and the influence you can have on your community will be better, as youвЂ™re coming back from a position where people can look at what youвЂ™ve done and try and emulate the same thing,вЂќ he says.

вЂњI think social justice is a driving factor for me for all my choices,вЂќ he says. вЂњImproving conditions for people who are less fortunate – whether it be through telling untold stories of those who are disadvantaged or, through law, helping people who have suffered find the best result for them so that theyвЂ™re not treated unfairly.вЂќ

Although his grassroots social justice work is on hold while he guns for gold at the Olympics, Shkara says itвЂ™s only temporary – depending, of course, on how well he does at this yearвЂ™s В Olympics.

вЂњMy plan is to go back, work a little more at a firm and eventually open up my own place. ThatвЂ™s the goal,вЂќ he says.

So who is ShkaraвЂ™s major competition at the 2016 Olympic Games this year?

вЂњWell the number one ranked athlete is from Iran actually, so heвЂ™s going to be tough,вЂќ he says.

вЂњThereвЂ™s a few tough countries in there, some really obscure countries. ThatвЂ™s the good thing about Taekwondo, you can get good athletes from any part of the world. ThereвЂ™s a really good guy from the Ivory Coast, Tunisia, a guy from Moldova, and then you have the main countries like Germany, England, Russia.вЂќ

But off the ground, Shkara says theyвЂ™re all just really good mates.

вЂњItвЂ™s a fighting sport, itвЂ™s a full contact sport, but you never really have any malicious feelings towards each other,вЂќ he says.

вЂњYou can see at the end of the fight theyвЂ™ll hug each other and hold hands, and that for me shows that they do respect each other – even with [a sport like] boxing. The way you come out, you come out in arms.вЂќ

Shkara is only eight days away from his debut match at the Rio Olympic Games. We ask him what he wants most out of this experience in which has invested so much.

вЂњI want to be able to look back on it in one yearвЂ™s time and say: вЂThat was a great experience, no regretsвЂ™. ThatвЂ™s my goal for the Olympics,вЂќ he says.

вЂњI know that if IвЂ™m relaxed and enjoying myself, I will give my best performance.вЂќ

To Shkara, holding himself to a positive mindset has been key in getting him through his journey, and he stresses the importance of having good support networks to help sustain this thought process.

вЂњI feel like getting a good result at the Olympics would be a good way to say thank you to everyone whoвЂ™s supported me along my journey in any kind of little way,вЂќ he says.

вЂњItвЂ™s a nice way to let them know that their efforts havenвЂ™t gone to waste.вЂќ

WeвЂ™re sure it hasnвЂ™t.