Zena Youseph has first-hand experience battling one of the bigger elephants in the Arab room. After accompanying her as she first learned of the Arab mental health taboo in part one of this series, then researched the history of Arab societies’ dealings with the subject in part two, we now join Zena in examining modern approaches to mental health in the Arab world for this final installment of the series… 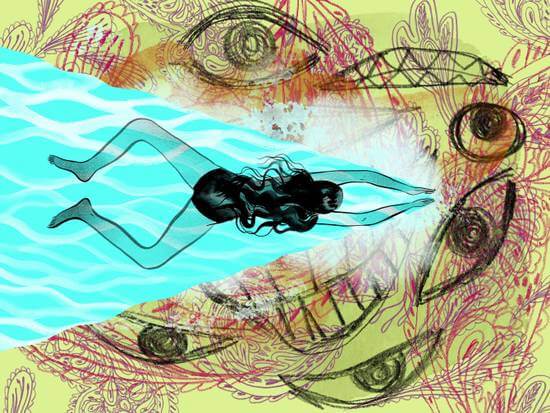 Innovative projects and initiatives for therapy in the Middle East are increasingly forcing a change in approach to mental health. Artwork by Tracey Le.

Can Arabs both in the Middle East and the diaspora, forge a new path in our attitude toward mental illness? For a myriad of social, historical and religious reasons (some of which were discussed in Part 2), we appear to have chosen the trajectory of superstition and fear of jinn (supernatural spirits) over the enquiring, rational approach promulgated by Ibn Sina. But how has this trajectory manifested itself in the perception and treatment of mental illness in Arabic communities today?

Given my upbringing as an Australian of Arabic heritage, I could intuit, even at a young age, that mental health was an embarrassingly awkward topic to broach with my family. I recall being bullied severely as a teenager when I’d just started at a new high school. Not once did I try to discuss this with my parents. I may have been wrong, but I had a strong sense that they didn’t have the parental tools needed to deal with my emotionally turbulent, adolescent self. No; my parents, hardy survivors of a bloody civil war, did not know how to entertain what they probably saw as fripperies, mere cuffs on the ear.

For the final part of my series, I wanted to know if there were any studies or research done in the topic of mental illness and treatment in the Middle East.

The first study I found was based on an epidemiological survey conducted on 2857 Lebanese adults between 2002 and 2003.

The purpose of the study, conducted by the Institute for Development, Research, Advocacy and Applied Care (IDRAAC), a non-government organisation founded by a team of mental health experts, was to research the prevalence of mental disorders and illnesses among Lebanese citizens. IDRAAC studied 2857 Lebanese citizens who were considered representative of the various demographics and socioeconomic backgrounds within five different provinces across the country as its subjects. Participants were subject to intensive interview using the World Health Organisation (WHO) Composite Interview Diagnostic Interview and the Diagnostic and Statistical Manual of Mental Disorders, 4 th Edition (DSM-IV).

The findings of the The L.E.B.A.N.O.N Study (The Lebanese Evaluation of the Burden of Ailments and Needs of the Nation Study) were first published in 2004, in The Journal of the American Medical Association (JAMA), then in the UK’s The Lancet journal in March 2006. Following the July 2006 war with Israel, the findings were again published, with added insight into the effects of war exposure on metal health, in The PLOS (Public Library of Science) journal. The paper was titled: “Lifetime Prevalence of Mental Disorders in Lebanon: First Onset, Treatment, and Exposure to War.” Although the findings of both reports confirmed what I had suspected all along, I was dismayed to find that they painted a bleak picture.

Among the findings were the following statistics:

Sadly, I wasn’t at all surprised with these findings. I had witnessed the cultural taboo surrounding mental illness within the Arab community – migrant and second or third generation alike – in Australia too often. Given this, I sought out some studies closer to home and found research papers written by Dr Jacqueline Youssef and Dr Frank P. Deane from the University of Woollongong that looked at factors that influenced the utilisation of mental health services by Arab-Australians. The results published found that shame associated with disclosing personal problems was the primary deterrent to seeking treatment in the Arab Australian community. Participants of the studies were also concerns that mental illness could affect chances of marriage – that is, that people who have acknowledged mental illnessed or mental health issues are less “marriageable”.

Another research thesis, also by Dr Jacqueline Youssef, looked at the views of community and religious leaders regarding use of mental health services. 85 religious leaders, from both the Christian and Muslim Arab-Australian communities were interviewed, and the results shed further light on the perception of mental illness in the Arab world and diaspora.

It is worth noting that, in the Middle East, where many of these Arab cultural norms seem to have been born, the taboo surrounding mental illness has only been compounded by the wars that have ravaged Palestine, Syria, Iraq, Yemen and Libya over the long years.

Fortunately, there are signs of hope. Various initiatives scattered across the Arab world reveal that the long stagnant attitude is slowly shifting. In 2007, Lebanese actor Zeina Daccache established an NGO called Catharsis: Lebanese Center for Drama Therapy, which provides therapy programs in schools, hospitals, clinics and prisons that use art and theatre to assist people in dealing with mental illness and trauma. Similarly in Gaza, organisations like We Are Not Numbers and The Gaza Mental Health Foundation provide critically needed mental health services as well as creative outlets through which Palestinians can express themselves.

The importance of these services cannot be understated. By giving people a voice – a means through which to express their grief, their fear, their vulnerability, their nightmares – these organisations and professionals are saving sufferers of mental health issues from the dark abyss of isolation and despair.

Let’s speak to others honestly about our own experiences with mental illness. By ‘we’ I am not referring to Arab-Australians alone, nor to Arabs in the Middle East or the global Arab diaspora. Rather, I am referring to anyone who happens to be reading this article and has ever suffered from the old ‘Black Dog’ of depression or other mental illnesses or disabilities.

Maybe our grandparents and parents didn’t have the knowledge that we have access to. Perhaps they thought that their approach to keeping the topic under wraps, hidden and unspoken of was the best way to looking out for us, our well-being and our standing in the community. They probably meant – and continue to mean – well.

This taboo is currently being challenged, albeit very slowly, by those brave enough to openly talk and write about misconceptions and mistreatment. We can create further impetus by simply discussing mental illness- with family and friends, community and religious centres, we can write (anonymously or publicly) about our personal experiences, we can debate and challenge archaic, discriminatory views of mental illness. It doesn’t seem like much- but it’s these incremental changes in personal and public discourse that, over time, and with much effort, effect a strong shift cultural perspective.