Legally Brown and the burden of representation 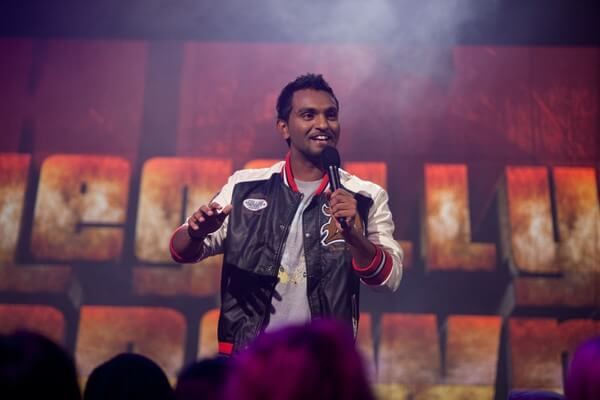 Australians are clearly begging for new faces on their local screens and earnestly pleading that these faces resemble the diversity Australia prides herself on. Or at least this is what both my Facebook and Twitter feeds seem to be suggesting, which partially explains the social media buzz around Nazeem Hussain’s latest cultural production, Legally Brown , that aired on SBS for the first time on Monday night.

Legally Brown is a 10 part comedy series written and hosted by Nazeem Hussain himself. He says the show features “a live studio audience of fans, interspersed with pre-recorded character and hidden camera stunts and scripted comedy sketches”.
Hussain used to co-present SBS’s ‘Muslim’ talk show Salam Cafe some five years ago, and he is also part of the comedy duo Fear of a Brown Planet, whose routines frequently bring to light ideas of racism, prejudice and privilege. With a host of other television appearances up his sleeve, he’s no stranger to the spotlight.
However, this time his face doesn’t appear alongside six other co-hosts nor does he share the limelight with fellow comedian Aamer Rahman. It is only his face that is plastered on adverts and alongside reviews. Hussain alone has become the poster-child for cultural diversity on Australian screens.
If Legally Brown proves to be a roaring success then Hussain will most definitely have a place in the ‘ethnic’ television history books, alongside the pioneers of Acropolis Now and Fat Pizza; we don’t all love them, but we know who they are and what they do. If for any reason (and there are many, most of which are beyond his control) Hussain fails, he alone takes the heat of what’s to come.
I’m well aware that there are other writers, actors, a team of producers and crew behind the scenes and, while the industry may take note of these people, the public certainly don’t acknowledge them. To the general public, his primary audience, Hussain is the beginning and the end of Legally Brown.
So as not to mince words, I’ll just say it: I wouldn’t have wanted to be Hussain on Monday night. Not because I thought Legally Brown sucked – I think the overall vibe is that the show is and will probably continue to be a success – but because it’s a lot of pressure for a single person to carry. 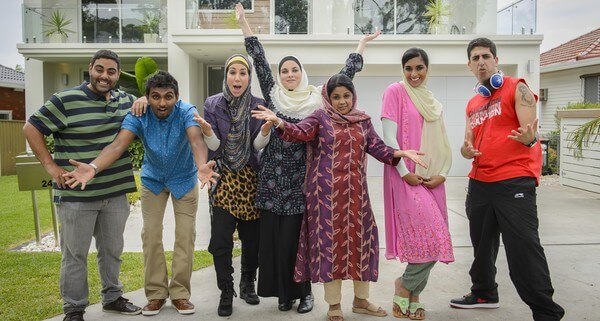 I do like to talk about feelings, but this article isn’t really about Hussain’s stress or his ability to deal with it. The point is precisely that the pressure stems from the complete lack of cultural representation on Australian screens. Eager audiences instantly expect that one program will fill every gap left by years of ongoing exclusion from the media landscape. Every person who identifies with ‘otherness’ suddenly expects to see themselves reflected and when, as is inevitably the case, this doesn’t happen the show is no longer taken and appreciated for what it is but rather dismissed as ‘lacking’ in one way or another.
As Ella Shohat, Kobena Mercer and Stuart Hall all discuss, the burden of representation occurs when a full spectrum of representation fails to exist for any one particular group. Meaning, that where representation is limited each instance of representation has a lot riding on it. It also incorporates the burden felt by people from minority groups to represent their group in a strictly positive light. After all, if each time we see a Muslim on television they’re blowing something up, it seems fitting that when a non-crazy Muslim gets the opportunity to be on TV for some other purpose they show that Muslims are actually super nice people. It’s a necessary approach to a structural issue but alone it cannot sustain the image of such a varied and diverse group of people.
An audience doesn’t want to be preached to. Audiences want to be affirmed – they want to engage with content that challenges them only slightly. Most of us watch TV hoping to learn something, but only a tiny something. We want validation, not a groundbreaking realisation that everything we thought we knew was incorrect. It takes a really open minded audience to continue to watch something that challenges their very understanding of themselves. Some might argue it takes the kind of audience SBS seems to attract to watch something that pushes them beyond their comfort zone.
For some, this is exactly what something like Legally Brown does. For others it’s complete affirmation. For others still, and arguably for the greatest number of Australians, they feel either offended or excluded by the kind of content offered in such a series. This categorisation applies to Muslims and non-Muslims alike.
I doubt that Legally Brown was ever intended to represent all Muslims or ‘brown’ people. That such a premise needs to be clarified points to how far we still have to go as a nation when it comes to the inclusion of minority groups on our television screens. The reality of a show like Legally Brown is that it can only successfully do what it sets out to achieve if it is considered as one body of work in and amongst a spectrum of others. Until this occurs, the pressure of what audiences believe they are entitled to, and what those who identify with Hussain either as Muslim or ‘other’ expect from him, will cause even the most merit-worthy parts of the production to cave under the pressure and be lost amidst the debris.
The problem, of course, is that unless you’re incredibly clued into the smaller cultural projects that come to fruition, in places like Western Sydney for example, you see a production like Legally Brown as the entire spectrum of representation of otherness and you cannot help but project upon it every desire you have for progressive representation. Unfortunately, when this occurs, everyone is left extremely disappointed and many will begin to call for the boycott of the production in question. The solution, however, is not to ‘perfect’ one product, but to have such a variety of products to choose from that invariably one of them will cater to your tastes.
The answer isn’t the end of Legally Brown, but, rather, the beginning of a space where more of these productions will thrive and survive, permanently altering Australia’s media landscape. The problem is not one program, it’s the ongoing exclusion of cultural and religious minorities within the media.

Sajjeling is an independently-run online platform dedicated to recording and unraveling Arab-Australian stories. If you would like to contribute to Sajjeling then write to us at sajjeling[AT]gmail[DOT]com. source