The inevitable question: "Are you Sunni or Alawi?"

There are some advantages to being the daughter of people that were once active members in the Lebanese Communist Party. One of them is that I was raised free of religious dogma.

When my parents migrated to Australia we settled first in Lakemba, then relocated to a suburb Fairfield, far west. At the time there were very few Arab/Muslim families in the area. My friends were mostly of Asian, Assyrian, Italian, and Anglo or Eastern-European background. 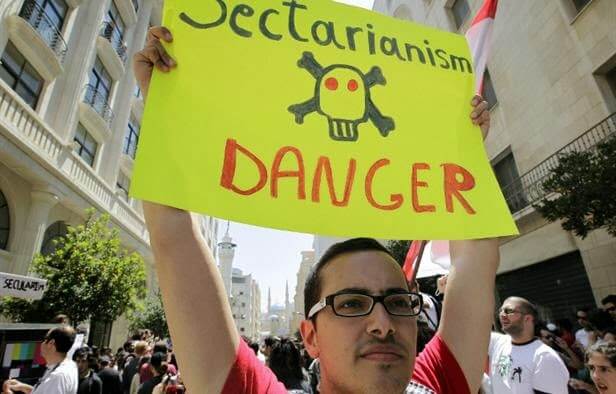 A Lebanese rally for secularism in downtown Beirut in 2010. Source: AFP

I look back very fondly on my childhood because though it was far from idyllic, there was a beauty and innocence about the way we all coexisted with very little racism or divisiveness.

When I was about fourteen, my parents relocated to a suburb that had a much higher percentage of families of Arab/Muslim extraction. Initially I found this comforting – after all, a shared heritage and culture makes assimilating into a new place a lot easier.

But soon after enrolling into the local school, I was in for a rude shock. Within days of attending my new school, I came home with a befuddling question that had been put to me by one of my peers, one of the ringleaders of the popular clique.

I remember my mum giving me a disconcerting look and asking “Who asked you about that?”

It was then, for the very first time, that I learned that Islam is divided into different branches or schools of belief, each with their own sect. I also learned that my father is a Sunni Muslim and that my mother is Alawi, and that this meant very little to them. So little, in fact, we didn’t even know such labels existed before hearing them uttered by our friends at school.

My mum seemed troubled by the fact that I was so inquisitive about this topic of sectarian differences and dismissed the conversation by snapping “Tell your friends it’s none of their business, it’s not important!”

At the time I didn’t understand why she was unsettled- what was the big deal? Over the years though, knowledge crept up on me through osmosis. I began to learn more about Arab history and politics and the ramifications of this divisiveness in the region, the history of British, French and U.S Imperialism in the region, my dad’s personal hero, Gamal Abdel Nasser’s attempt to create a pan-Arab state with nationalist interests and the ensuing wars and conflicts.

This knowledge, as well as my trip to my parent’s native city in Lebanon in late 2006, gave me further insight into the problems and political convenience of sectarian division in such an oil-rich, lucrative region. I don’t recall exactly which year I started noticing it, but pretty soon, asking what sect you are from – whether in a direct or roundabout way (such as enquiring about the family name is, as it is apparent from some names which sect one is from) – became The Inevitable Question.

No more did this hit home than when I was having a conversation with my Lebanese cousins in Tripoli about the war with Israel, which had ended only a few months earlier, killing over a thousand civilians and destroying much of the countries roads and infrastructure.

“They keep causing trouble with Israel, they are provoking Israel. They should not be toying with a country that has far greater military and political clout.”

Who are they? Not their fellow Lebanese, their fellow Arabs, their fellow Muslims, who had suffered greatly under the hands of Israeli invasion of the South of Lebanon, but they were the Shias.

Little sympathy was shown for their cause or their right to defend their land from invasion. My Lebanese family on my father’s side proudly brandished posters of Saad Hariri, son of the late Prime Minister Rafik Hariri, and chanted along at pro-Hariri protests without so much as a brief discussion or criticism of his alliance with George Bush Junior, who had recently stood by and watched as Israel bombed Lebanon with impunity for over a month, repeating the Orwellian mantra of Israel’s ‘right to defend herself’.

Spending time between my mother’s Alawi side and my dad’s Sunni side of the family gave me unique insight into the degree of sectarian divisiveness.

My cousin from my dad’s side asked me bluntly one evening as we drove from El-Ebeh back to Abu Samra: “So what are you? You’re Sunni, right?” Meaning that because my father is Sunni, I should be too. Taken aback by his brazenness I said, tersely over my words, “I am nothing.”

I think it was in that moment that the impact of sectarian division hit home. It seemed that The Inevitable Question had become more important than all other questions – “Do you believe in human rights?”, “Why are you voting for that candidate – does he/she truly represents you?”, “What are his/hers policies?” Those questions fell by the wayside as The Inevitable Question took on a more significant value when it came to determining what we thought of our fellow Arab/Muslim.

Back in the days of the first Lebanese Civil War, from which my family had fled, Muslims and Christians were in violent conflict almost two decades. Now it seems the tension and hatred is rising between Sunnis, Shias and the Alawis.

Looking into Lebanese history, I also learned about the Lebanese parliamentary system, which a Times article referred to as an ‘ Ironclad tradition ’, but to me seemed more a vestige of French colonialism, starting with the covert Sykes-Picot agreement in May 1916, in which the previously Ottoman-controlled regions of the Middle-East became British and French mandates .

T he way it was set up on the basis of religious and sectarian differences seemed to be an invitation for entrenched division and political bias: The Prime Minister must be Sunni, the president a Maronite Christian and the head of parliament a Shia. So in other words: forget the merits and the policies of the candidates – their religion and sect is the ultimate deciding factor.

I am left wondering how much of this is responsible for the reaction of some of my students when I tell them I went to school in Bankstown. “Full of Wahhabis” they say distastefully. I try and explain to them that not all Sunnis are Wahhabis and that they shouldn’t judge people based on something they cannot help and that has no correlation with their morals and traits as human beings.

I try and stay positive, though at times it looks like an uphill battle. Getting Arabs, in the Middle East and worldwide to shed their tribalism and asking them to see that the only way forward is to let go of their preoccupation with sect and religion and begin using their mental and physical energy, their brains and passion to create a cohesive and strong people that value education, reason and justice – not just among themselves but for all- above any kind of division, is not an easy task.

Zena is a Sydney-based English teacher with a long-standing love affair with the written word.