Renowned Palestinian poet Rafeef Ziadah was recently on tour to promote her debut album, ‘I Teach Life’. Sajjeling contributor Sara Saleh caught up with Rafeef backstage at the Sydney leg of her sold-out tour last month, and here’s how their conversation unfolded… 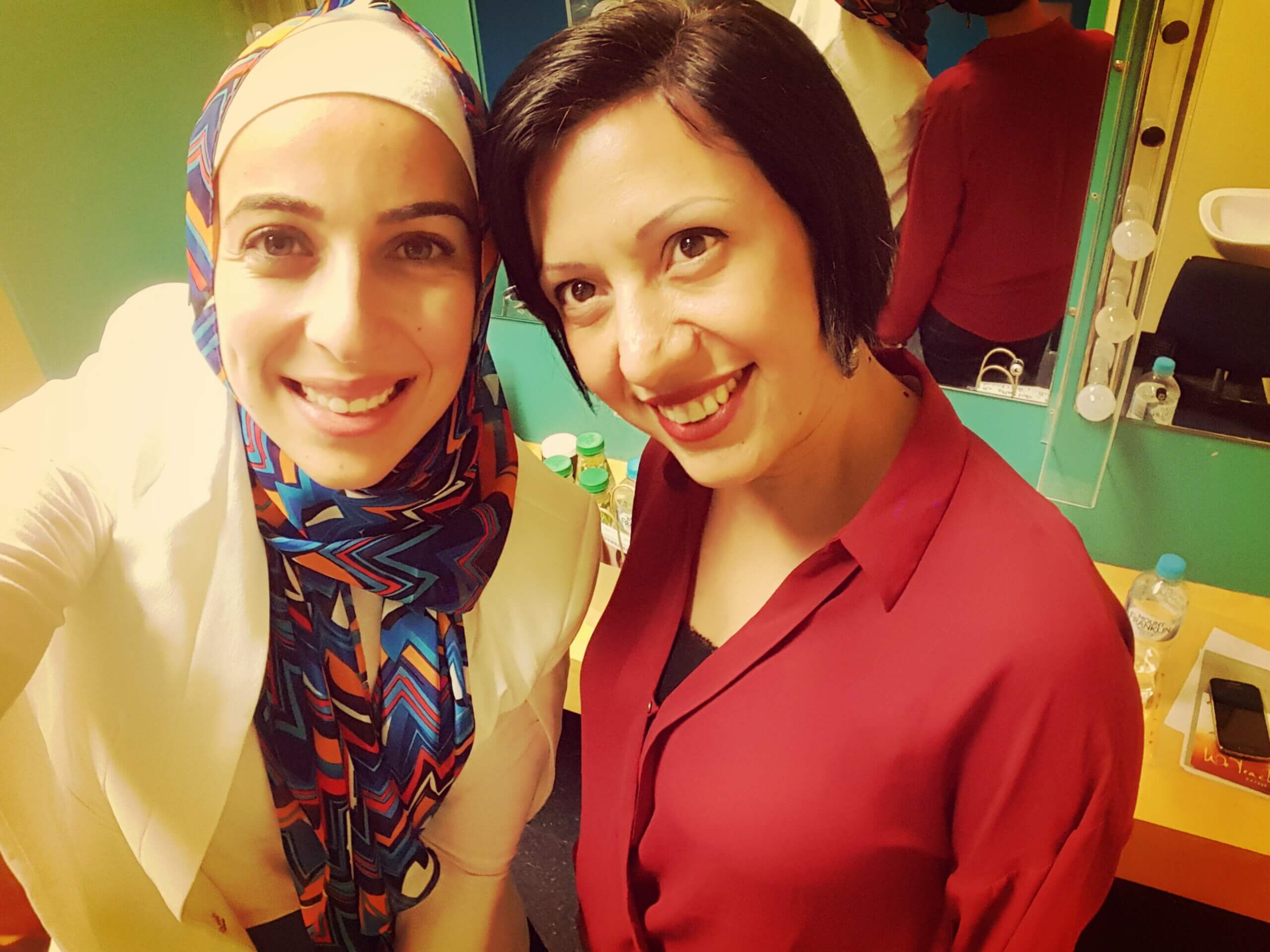 Sara caught up with Rafeef Ziadah backstage at her Sydney performance of “We Teach Life”.

“The poetry I do is a compilation of all my places of exile,” Palestinian-Canadian poet Rafeef Ziadah tells me just before she goes on stage to perform to a packed audience at Parramatta’s Riverside Theatre.

“I grew up in Lebanon, but we left on the cusp of the civil war. As Palestinian refugees, we lived in about at least 10 countries before I had even finished high school. I did my Masters in the US, my PhD in Canada, and now I’m completing postdoctoral research in London.”

Visiting Australia to debut her new spoken-word album, ‘We Teach Life’, Ziadah performed to sold out audiences in Brisbane, Melbourne and Byron Bay before making her way to Sydney for the last leg of her Australian tour.

This is the first time that Ziadah has brought her spoken-word poetry to Australia, but audiences down-under are no strangers to her work. Her performance piece, “I Teach Life, Sir”, went viral online following the 2009 war on Gaza, reaching hundreds of thousands around the globe and propelling her to fame. She has used the platform ever since to raise awareness on the issues that matter to her.

“Art gives us the space to intervene in public in ways that are blocked to us, and I think it’s important to think how can we reach people in creative ways, in ways that will make people listen, and that will affect them on a personal level. Art does these things,” she says.

Despite the difficulty of measuring art as an avenue for change, Ziadah believes its impact cannot be overstated – especially in human rights advocacy.

“We have forgotten in social justice movements that art is what sustains people,” she says.

“If you think of any struggle, South Africa’s anti-Apartheid struggle, for instance, what people remember of it is the amazing music, the amazing concerts that people put on – and the activist actions as well.”

And for Ziadah, one area that she passionately wished to bring to the world’s attention was that of Palestine and the Israeli apartheid.

“The image of Palestine is so distorted in mainstream Western media – it’s mainly driven by the Israeli narrative. Palestinians simply don’t exist, and if they do, it’s always in negative, stereotypical terms,” she says.

“Anything that breaks through that is important, and I found that poetry and art are able to reach people in a different way, in a more human way than any political speech I can make. I still do the political speeches, and the organising, but there’s something about art that touches people’s souls and I feel that with spoken word it has a way to reach people differently.”

Ziadah’s style as a poet was inevitably influenced by her nomadic life and her exposure to various shades of poetry scenes across the continents she traversed.

“There’s a huge Jamaican dubstep movement in Canada and an incredibly powerful spoken word scene in New York. Just watching people on stage do that and capture art, politics and strength of words all in one place… That’s what really pushed me to be able to take my poetry in ways I wanted to,” she says.

And although she is renowned for her English language performance pieces, the poet and activist has actually been composing in Arabic for most of her life.

“A lot of people don’t realise Arabic is my first language. I didn’t learn English until I was in high school,” she says.

“Being Palestinian, poets like Mahmoud Darwish, Samih al-Qassim, and Ghassan Kanafani’s writings are central in our lives. Often, they were a mode of survival for those of us in Lebanon during the [first civil] war, they were present in our households… I could recite Mahmoud Darwish before I could even speak properly.”

“A defining moment for me was being able to write in English and then performing on stage, because I was afraid of performing.”

The impetus for Ziadah to push past those fears was born of a bad experience she had at university.

“A man kicked me and said that I deserve to be raped before I have terrorist children.”

That jarring incident was enough to spark her spirit and propel her to the stage.

“Initially, I had terrible stage fright. That’s why I really encourage people to try out spoken word poetry and poetry workshops, because it’s a skill that you can learn,” she says.

“And quite often there will be mothers and daughters that attend my performances and appreciate the art and say they want to start getting into it too. This makes me especially happy because certainly growing up there was a stigma in different communities around children becoming artists, but that’s certainly changing quite a bit.”

Nonetheless, Ziadah does not consider her poetry as her full-time career and says that she still does not refer to herself as an artist.

“Though it’s difficult to juggle full time work and poetry, this is a conscious decision I have made because I worry about the kinds of compromises artists sometimes have to make if it’s the way they earn a living,” she says.

“Very early on when the poem ‘We Teach Life, Sir’ went viral, I started getting offers from producers, but they would always say things like, ‘Why don’t you tone it down, and speak about things like Arab women and the oppression of Arab women’.”

Ziadah was not willing to play into these controlled narratives.

“They want to put us in this box of framing– especially when it comes to Arab women, and not in ways that I would want to talk about it as an Arab woman and poet,” she says.

“I’m all for speaking out against oppression – but not in the orientalist way they wanted.”

Much like the rest of the world, the spoken word movement in Australia has been linked to the necessity for minority groups to have a voice and a space for opposition within and beyond the mainstream. I ask Ziadah what she thinks of this.

“I think spoken word is where political hip-hop went to hide, because once it gets commercialised, the politics gets gutted out of it,” she says.

“You can really tell where a lot of artists come from when you listen to the kind of issues they speak about – refugee rights, Islamophobia, questions of Palestine, anti-occupation narratives… As a form, spoken word allows for these oppositional movements to exist.”

But in recognising this, Ziadah says that the significance of interspersing these spaces with cultural expression should not be neglected.

“I think that spoken word in particular really speaks to the need for minorities to express themselves in cultural forms, and I think activists forget about that.”

She uses her heritage to give an example.

“Israel has always maintained that there was no Palestinian people so our culture itself is under attack, so culture – whether dabke or singing – is the way we express ourselves, the way we survive; it’s a central part of how we exist as Palestinians,” she explains.

“I don’t know how to exist outside this, even though in the West broadly speaking, culture has been so commoditised lately and stripped of its essence.”

Outside of her world tour, Ziadah’s other passion is recording refugee narratives, and in particular the stories of those currently journeying through Europe in search of safe refuge.

“One of the issues today is that people are forgetting,” she says.

“I have been doing a lot of work around narratives and documenting people’s journeys. And I will continue to write and tell stories and ask questions about exile.”

Sara is an Arab-Australian human rights law and refugee advocate, grassroots activist and creative artist with a decade-long career working with NGOs like Amnesty International Australia, to performing her poetry locally and internationally.
Sara regularly speaks and writes on human rights, refugees, Palestine and the politics of language and identity, has been published across national media and featured on ABC program The Drum.
A 2015 Australian Poetry Slam NSW State Finalist, Sara is currently working on her social enterprise, ReBOOKS, dedicated to improving refugee literacy, and is a Board Member of WestWords and GetUp!.