Villa Touma and the internal occupation

Amal Awad talks to Palestinian filmmaker Suha Arraf about her film Villa Touma, which is currently screening at the Sydney Film Festival, and the politics of representing Palestine and Palestinians in film …

There’s more to this family than meets the eye. Image supplied.

“You must forget everything you know.”

This line from the film Villa Touma comes early in a story that is, ironically, about the inability to let go of what you know.

Written and directed by Palestinian filmmaker Suha Arraf, Villa Touma tells the tale of three Palestinian Christian sisters who are forced to take in their orphan niece, Badia (Maria Zreik). The commanding eldest sister, Juliette (Nisreen Faour), the mentally troubled Violet (Ula Tabari) and the kind-hearted Antoinette (Cherien Dabis) usher Badia into a world that is a tinted snapshot of the past: one that embraces aristocracy and rules, and where girls dress and behave according to strict standards.

It is a stunning film; deceptively simple-looking, yet remarkably deep in its commentary on human survival. Inspired by the true story of a woman who shuttered herself into the Ramallah Hotel post-1967, Villa Touma documents what it means to be “frozen in time”. 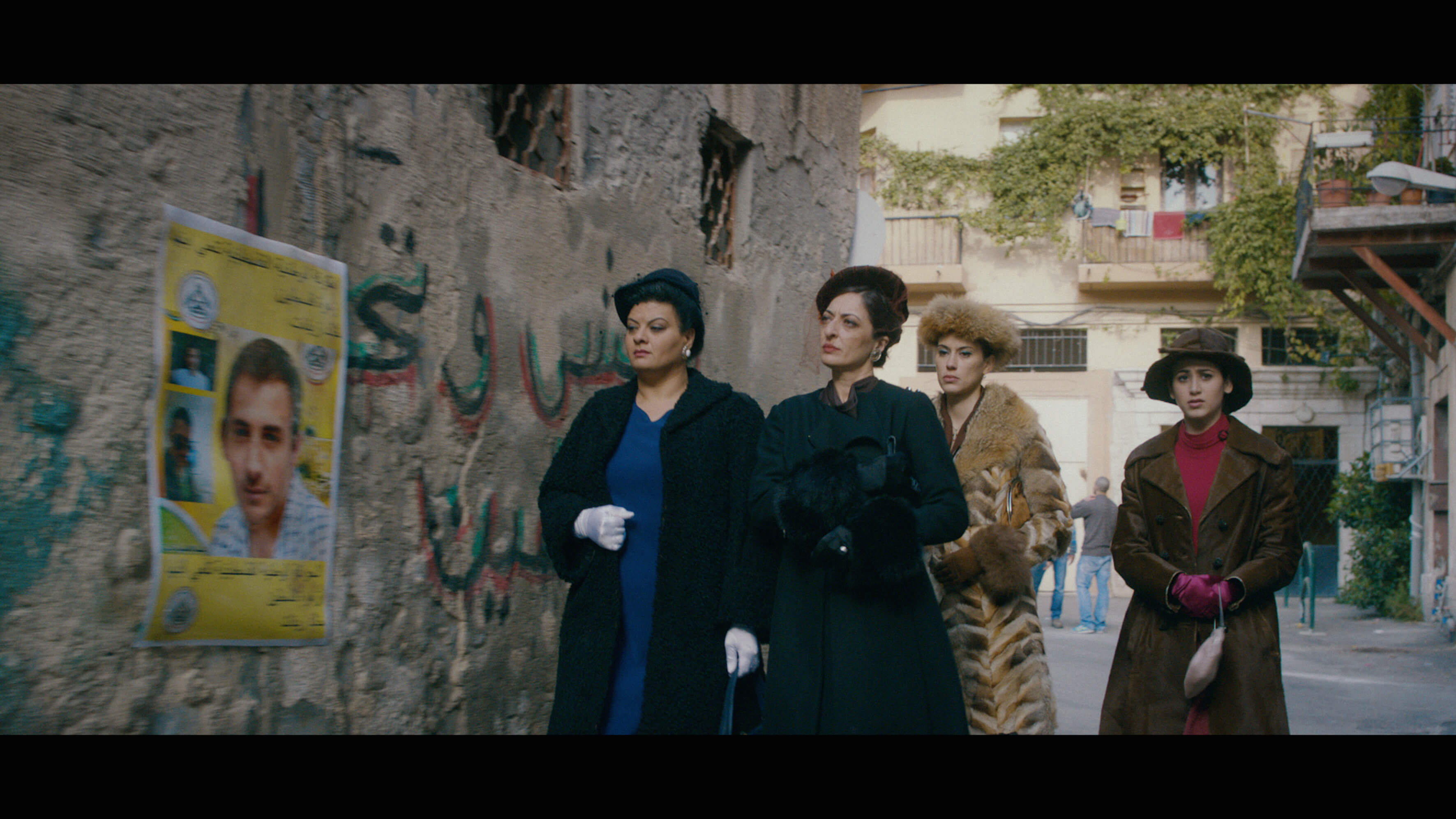 “I like this interior world, interior emotion – not only the slogans about Palestine.”

Arraf argues that films drowning in politics are forgettable. It’s not that her stories aren’t political; she wrote The Lemon Tree and The Syrian Bride, and directed the documentary Women of Hamas. Yet, while Villa Touma is a story steeped in character, it is also a study in the consequences of occupation and the inability to accept the change it demands of those living under its shadow.

“You see a human story; all the occupation is in the soundtrack.”

The film mainly takes place in the sisters’ villa, and [spoiler alert] you’re led to believe that it’s set in a time not far from 1967. But, on the few occasions that the action moves beyond the villa’s cold walls, we see a modern Palestine bursting with people living under occupation.

“You feel the occupation all the time; it’s claustrophobic,” Arraf says.

“You feel the interior occupation.”

She portrays this stasis by confining much of the action to the villa, where the sisters’ denial counters Badia’s attempts to connect with her aunts. There is Juliette’s refusal to relinquish traditions and appearances, Violet’s inability to, literally, look in a mirror and face reality, and Antoinette’s mourning of both her opportunities and her future.

There are moments – mainly fleeting – where the sisters’ immunity to change is challenged. Antoinette is the most malleable of them; she doesn’t wish to deny her young niece the life of happiness from which she has been deprived. But, ultimately, Arraf’s portrayal is one mired to reality – we do not change with ease. 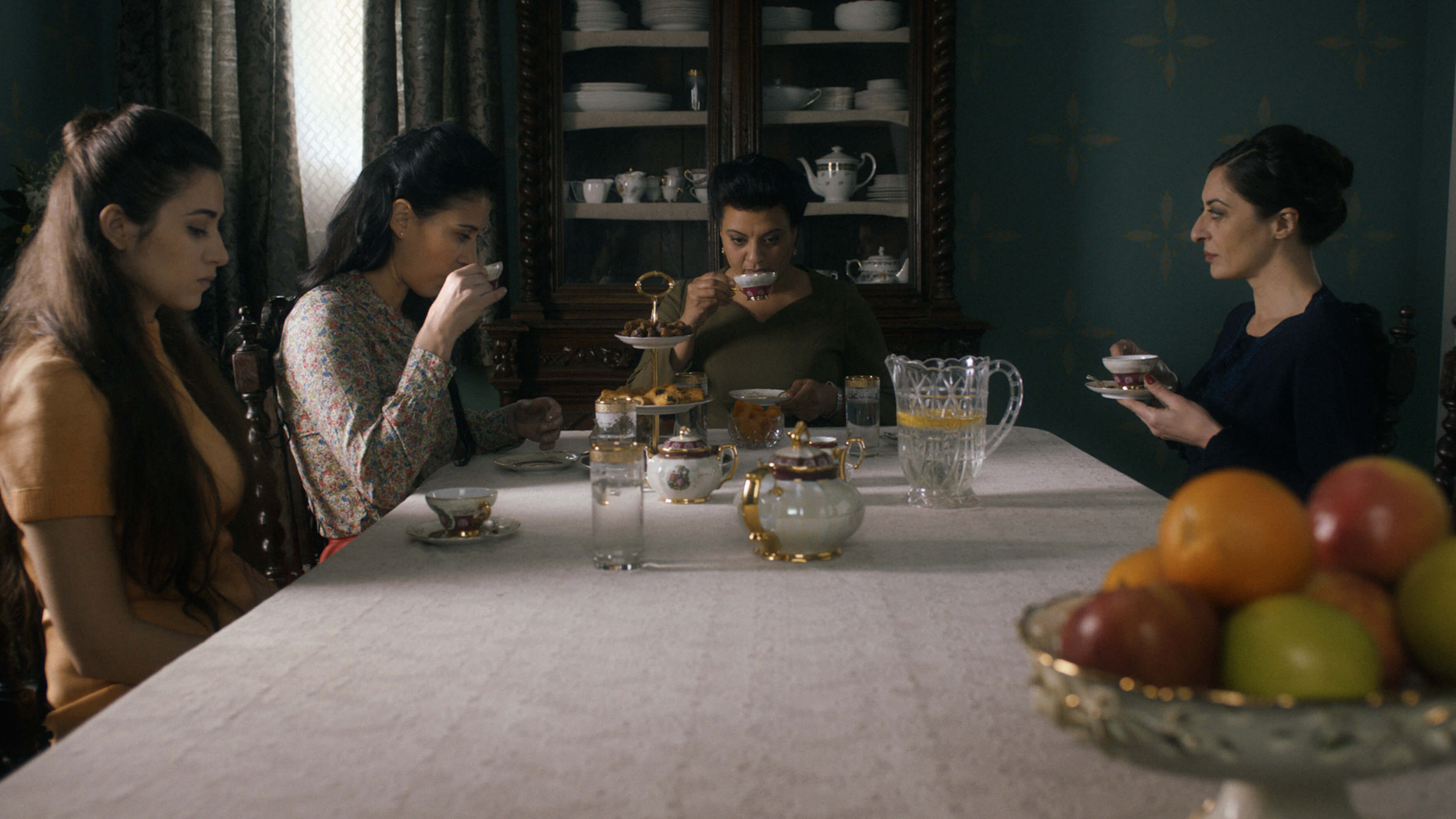 While the film draws you in with its humour and drama, it is also a testament to human behaviour and the need to pretend, post-trauma, as anything else is too difficult.

For the women of Villa Touma, their identities, disappointments and dreams are all locked inside their home, which operates much like a museum – a meeting place of things and ideas, but not fluid, present-day reality. And the sisters’ lives, Arraf notes, are fake – not only to the outside world, but between themselves.

“The three of them are like in a theatre play. They have masks and they’re playing everything. When [each woman] is in her own room, you see her real face.”

If the film is a metaphor for occupation and the inability to accept it, Arraf seems also to be chiding the Arab world’s inability to deal with weakness and emotion.

“We can’t show our emotion. It’s ‘ayb [inappropriate]. To be in love is ‘ayb. To be in crisis and to show your crisis to others is ‘ayb, especially for men. And this is why I think the mothers of the martyrs show they’re happy.” 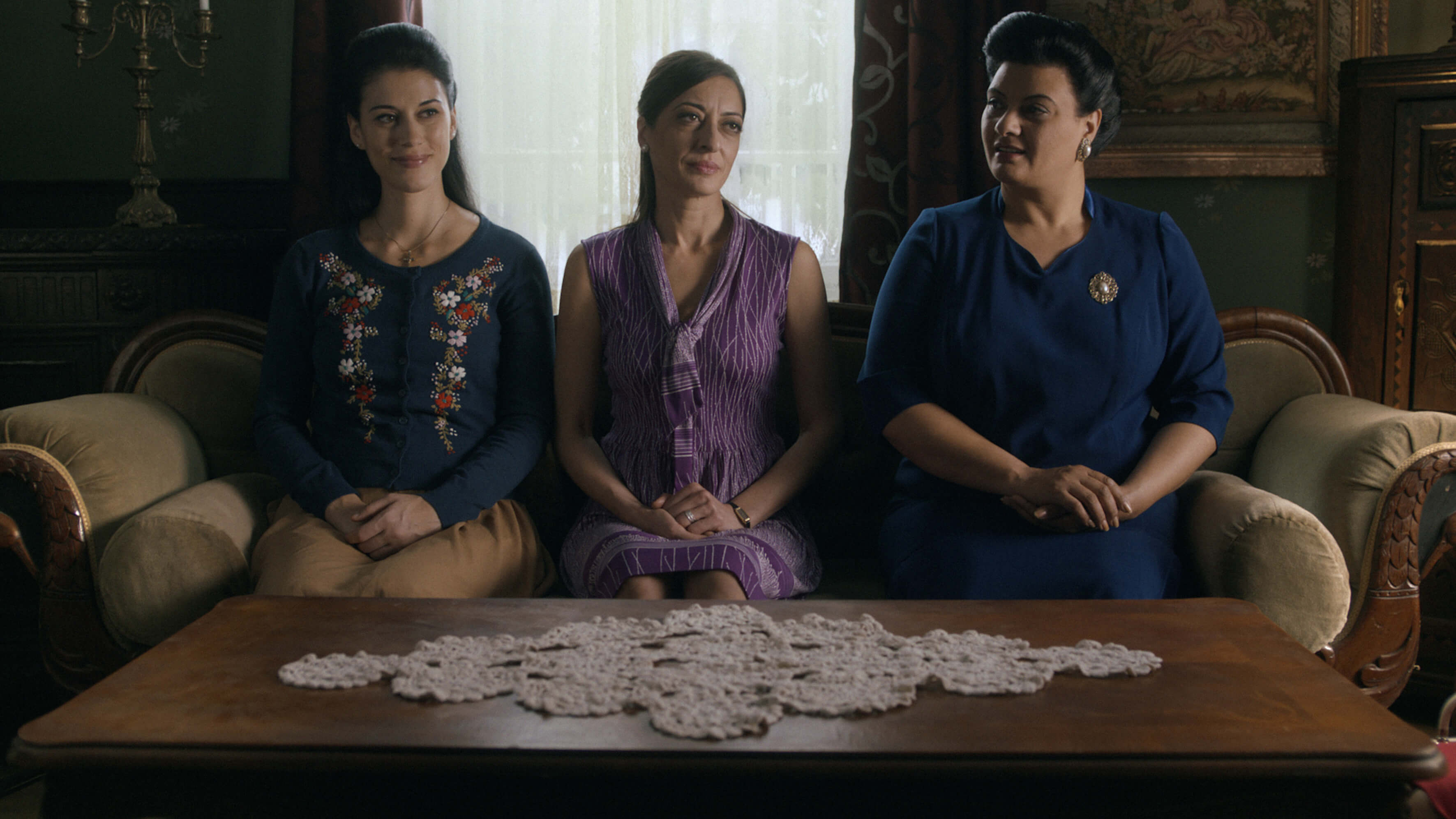 “They know they’re not happy; they’re crying all day and night for a long, long time. But for the media, and from this pressure, they need to show how much they’re strong, not to express emotion. We didn’t grow up [being allowed] to show emotion, and it’s one of our biggest problems in the Arab world.”

To Arraf, the film is an exploration of human struggle, not an indulgent fable of Palestinian heroism or victimisation.

“When you become a victim, you like to play a victim or you feel a victim.”

The problem, Arraf adds, is that Palestinians like the big “hero stories”, despite their crushing losses over the past century.

And both the victim and the hero stereotypes are what Arraf believes the world is asking of Palestinian cinema. 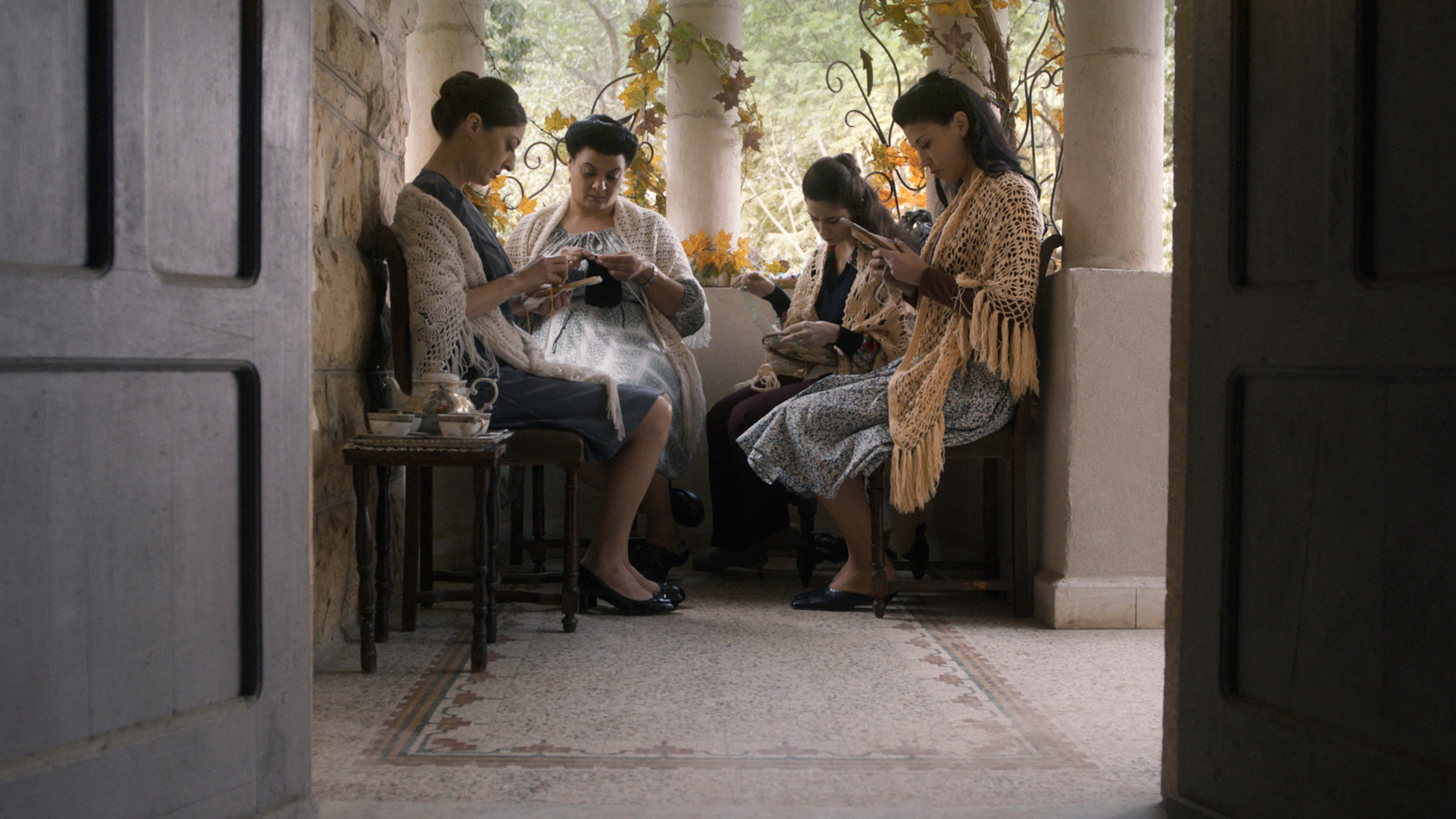 Much of the film takes place within the villa. Image supplied.

“Especially the victimisation. We saw [ourselves as] heroes or victims, but they saw us as victims or terrorists. And they ask us to show how we’re victims so that at least they can have feelings for us – ah, the poor Palestinians. And I’m talking now, not about governments, I’m talking about the people [in the street]. This is the cinema that we do.”

Arraf does not only reject the formulaic narrative of Palestinian filmmakers – her grievance extends to the wider Arab world’s films, and Hollywood (the latter of which she has little in interest in).

It’s no surprise that Arraf scoffs at the neat endings of standard Hollywood films in favour of honesty. However, truthfulness comes at a price.

Badia plays the piano for her aunts. Image: supplied.

While the film has been a surprise hit on the festival circuit, with the 2015 Sydney Film Festival being its 77th entry, the path to success was paved with struggle. The European film producers who happily supported Arraf’s more ostensible ventures into political filmmaking (e.g., The Lemon Tree, which saw a Palestinian woman defend her land against an Israeli government official), wanted conflict. They weren’t interested in a story about three sisters who try to enforce an outdated way of living on a naive young relative.

It forced Arraf to seek out Israeli funding for the film and commit to a low budget. Villa Touma was released without fanfare as a Palestinian film. Then the Venice Film Festival loved it, and Israel wanted its name stamped on it. Arraf made the decision to present the film as ‘stateless’, and Israel has since changed its rules about funding.

“Now if you take money from Israel, you have to present it as an Israeli film,” says Arraf, who queries the condition given that most Israeli films are European funded.

It’s a problem that will impact Palestinian filmmakers, but it’s not likely to slow Arraf down. She is currently writing her next film, and working with a producer in France. Once again, her focus is Palestine. It is clear from Villa Touma that it’s a place she knows well.

Ultimately, Villa Touma, both austere yet lavish in its nod to the magnificence of the past, is a grand metaphor for the state of Palestine, and importantly, the mindset of Palestinians betrayed by their history.

Villa Touma will next screen at the Sydney Film Festival on 15 – 16 June.