Have you ever felt that you are personal friends with characters in a movie or play that you are completely immersed in?

That’s the effect that Donna Abela’s play, Jump for Jordan, had on me.

The play tells the story of Sophia, a sarcastic archaeology student who has flunked a few subjects at University but makes up for her deficient technical skills with passion. Sophia is the daughter of Palestinian and Jordanian parents who came to Australia, like so many other Arabs, in search of something better than what they’d lived through back home. Also like so many other Arabs, they discovered that the unfortunate price of a secure future involves – at least sometimes – the painful relinquishing of a valued past. 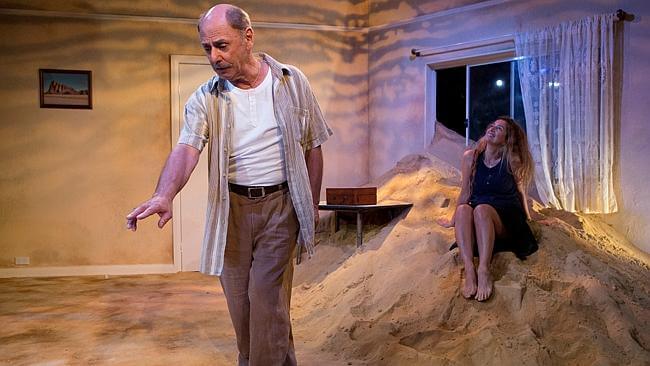 We meet Sophia’s father, a traumatised Palestinian man, only through memories or fantasies. He named his daughters Sophia and Loren after the iconic Italian actress known for her performances in escapist films. His was the kind of desolate disappointment in his own heritage that saw him refuse to teach his daughters Arabic, such that upon his premature death they were left with a sense of identity more fragmented that the very region he left behind.

The play commences with an emergency. Sophia is summoned from her self-imposed exile (with her same-sex partner, Samantha, of whom her mother is not aware) to the family home she had left some years before. The emergency? Her sister Loren is marrying. And what would a play full of Arabs be without the threat of a loveless (albeit financially fortuitous) marriage?

The action then centers on the arrival of their aunt Azza from Jordan to attend Loren’s wedding. Azza is a stand-out character, and it is through her that the commentary on negative perceptions of Arabs in Australia is explored. The Aunt Azza of Sophia’s imagination is decked out in military garb, slinging a rifle across her shoulder, beating up strangers and referring to those she disapproves of as ‘public enemy infidels’. The real Azza, however, is a soft-spoken university professor – much nicer than most of mine – who is truly concerned with the well-being of her nieces. Her character serves to debunk preconceived notions of the Arab as a violent, unreasonable and irrational being, and all in a hilariously unsubtle manner that makes her greatly endearing. Then there’s Sophia’s mother, who is strikingly reminiscent of so many Arab mothers I know. From her consistent penchant for melodrama to her unwavering stubbornness and frequent insistence that her daughters simply cannot leave the family home unmarried, she is a profoundly emotive character who, in her own words, was imprisoned ‘within [her] own language’ in a foreign land.

With little more in the way of props than a pile of sand and a wooden shelf, the play transports its audience from a plot of land in Campbelltown to gardens in Jenin and from an apartment in Glebe to an archaeological site in Petra, traversing the homes and stories of three generations. Through the use of Sophia and Samantha’s love for archaeology and their unrealistic plans to move and work in Petra, the story explores some interesting elements of what it means to belong somewhere and to someone, how this sense of belonging can change over time and, most pointedly, how sometimes this sense of belonging can remain the same for generations.

My experience of Jump for Jordan was inevitably one of a first generation Arab Australian and, as such, I was perhaps able to relate to the play with a little more enthusiasm than the average viewer. My one criticism would be that in its immensity and its attempt to tackle the migrant experience from so many angles, the play touched on problems and ideas that it then left relatively underdeveloped or unexplored. Most obvious of these was the relationship between Sophia and Samantha. Unsurprisingly, the theme of breaking-your-homosexuality-to-your-Arab-mother was not broached.

This was perhaps my only criticism of the play as Jump for Jordan was so complex, its story broaching ideas so compelling and tightly interwoven, that there was simply not enough time to explore all of the issues raised. That and the fact that I have to remind myself I’m not actually friends with Sophia, so I can’t just ask her these questions myself.