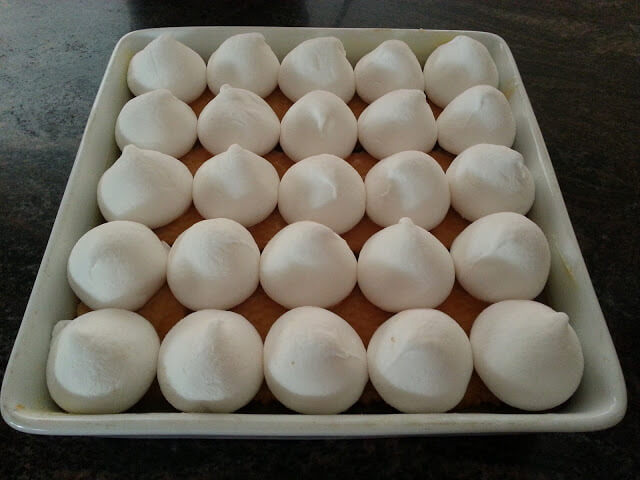 This year, Ramadan coincides with winter in Australia. What better way to warm up the cold month than to top up the traditional ingredients of the holy season with toasted marshmallows?

My mother came across this recipe while watching popular Arab TV chef, Manal El-Alem, work her magic on Arabic satellite television. We tested it out on friends and colleagues, and voila! Instant goodness in a melted mouthful.

1. Dissolve corn flour and sugar in the apricot nectar juice by stirring in a saucepan until smooth.
2. Turn the stove on and place the saucepan on low heat.
3. Stir mixture continuously until it becomes thick enough that the ladle leaves a marked trail as you push it through the newly-formed pudding.
4. Take the pudding off the heat.
5. Grease a 7cm deep, oven-proof serving dish.
6. Dip plain biscuits in warm milk to soften, then line them side by side in the dish to create a base layer.
7. Pour the pudding slowly over the biscuit base until even.
8. Line another layer of biscuits side by side over the pudding.
9. Flip the top layer of biscuits over so that the coated side is facing upwards.
10. Top the dish with a layer of marshmallows.

Place the dish in the grill for two minutes before serving to toast the marshmallows. Remove it as soon as the tips turn golden.

Be careful not to leave the dish in the oven for too long so as not to affect the pudding layer.