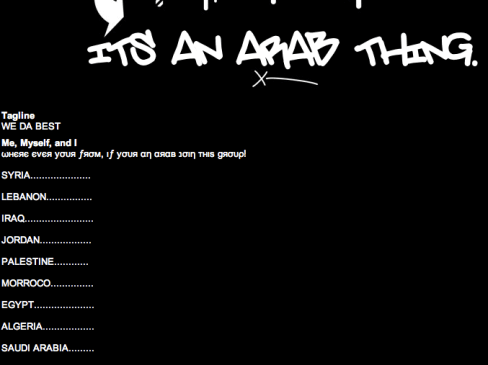 “We Da Best”, a Bebo group dedicated to Arabs.

A recent study found that email addresses and pseudonyms used on social networking sites form a vital part in the construction of national identity for Arab-Australians aged 18 to 25.

The study, facilitated by the Watan Organisation, sampled Arabs in Sydney who grew up using the once popular social networking site Bebo, and Windows Live Messenger (MSN) – an online chatting service that recently closed down.

Ahmed Abdullah, 20, who used the email address lebaneze2plz_93@hotmail.com in high school, said the address allowed him to comfortably express his ethnic identity to his peers.

“Look, I could have been a gronk and gone up to a chick in real life, you know, to tell her that I’m Lebanese and ready to please, but f**k that for a joke; it’s easier over MSN. She reads my addy and, bam, she gets the picture,” he said.

Ex-Hotmail user Sarah Hanania, 19, said her email address was palopride_princess1@hotmail.com in high school. Ms Hanania now has a Gmail account, but she said that she still occasionally logs into her Hotmail account because she misses “the feeling of logging out to see Ninemsn.com”.

“My MSN Nickname used to say Free Palestine and my display photo was of this really cute kid with the Palestinian flag painted on his face,” she said.

“He had green eyes and everything. Oh my God. So cute. I want babies now,” she said.

Ms Hanania said she sometimes changed her MSN Nickname to “Oslo was a joke” if she got bored of “Free Palestine”.

Mr Abdullah said he received many positive comments under photos of him crouching with his mates while holding up the Lebanese flag.

“It made me even more proud to be Lebanese ‘cause everyone wants to be one of us,” he said.

“I swear I got so much Bebo Love. If I was able to cash it in for something, I’d have a house on the waterfront at Brighton or something,” he said.

Arab youth are also using Facebook features in an attempt to liberate Syria from the current conflict.

Ranya Shammas, 21, recently changed her name on Facebook to Ranya FreeSyria as an expression of solidarity with the Syrian government.

“I’m doing my bit to end the civil war. I won’t be silent. This new surname will really show those murderous Wahabi thugs,” she said.

Ms Shammas bags groceries at her local IGA, but lists her current job on Facebook as “Bashar’s Freedom Fighter”.

Ibrahim Mahmoud, 23, also changed his surname to FreeSyria on Facebook, but as a form of protest against the Syrian government.

“I hope Bashar al-Assad comes across my Facebook profile. While innocents are dying, he’s downloading Chris Brown songs and probably browsing 9GAG. Maybe he’ll finally step down once he sees how serious I am about freeing Syria. It’s all in the name and cover photo,” he said.

“I think I’ll post an angry Facebook status about him – similarly worded to the last 10 I posted this week,” Mr Mahmoud added.

The Watan Organisation also noted the importance of online flame wars in identity formation. In the study’s concluding notes, Watan encouraged Arab-Australian youth to “make a pot of cinnamon tea and tear at each other like the keyboard warriors you are on a Saturday night because you have nothing else better to do”.