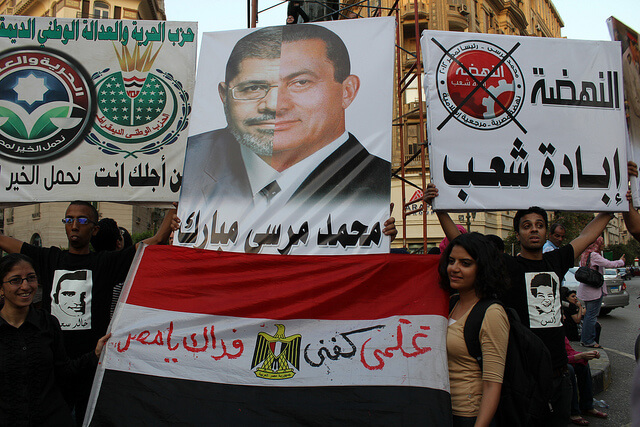 By now, even the least news savvy of Australians have noticed that something is underfoot in the land that brought you the pyramids, cotton, and a revolution in 2011.

But contrary to the stereotypically relaxed pace at which Arabs tend to operate, events in Egypt escalated so quickly in the last 10 days that trawling through all the news articles understandably seems like a daunting task at this point.

Luckily, Sajjeling is ready with a thorough rewind of all the events you need to know below.

Egyptians took to the streets to protest the oppressive living conditions that came with an almost 30-year-long dictatorship under the rule of then-president, Hosni Mubarak.

Mubarak stepped down from presidency, and the Supreme Council of Armed Forces (SCAF) took control until elections so a new Egypt could be organised. 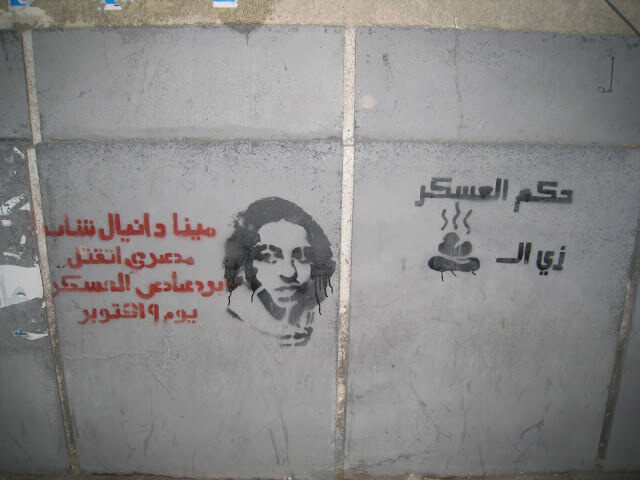 Graffiti in Alexandria: On the left, Mena Daniel, a young Egyptian protester killed by the military on October 9 is memorialised, and a slogan denouncing the Supreme Council of Armed Forces (SCAF) on the right. Source: Miran Hosny, 2012

After months of protests against SCAFвЂ™s continued military control and all its trappings, elections were held for the first civilian President of Egypt. The two candidates with the most votes were Ahmad Shafiq, a member of the old Mubarak guard, and Dr Mohammad Morsi, a Muslim Brotherhood candidate.

Morsi was sworn in as the new President of the Arab Republic of Egypt, after winning the elections with 51.7% of votes compared to ShafiqвЂ™s 48.3%. The people set up a MorsiMeter to measure how many of his promises would be achieved in the first 100 days of rule.В 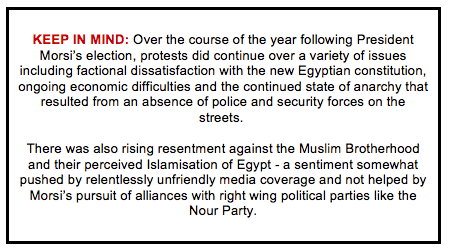 Close to the one year anniversary of President MorsiвЂ™s election, a group of Egyptian youth dissatisfied with his rule put together a campaign called вЂњTamarodвЂќ (literally вЂњrebellionвЂќ). They set about collecting signatures on petitions that called for the retraction of the peopleвЂ™s confidence in Morsi, therefore retracting his legitimacy as president.

Armed with their petitions, MorsiвЂ™s opposers took to the streets a day earlier than planned. The National Salvation Front (the coalition of main political opposition figures) fully supported the protests. Muslim Brotherhood headquarters were torched across Egypt, and a yearвЂ™s worth of tension spilled into street conflicts between people for and against Morsi.

On the anniversary of MorsiвЂ™s appointment as President of Egypt, Egyptians marched en masse. Tamarod set up camp in Tahrir Square, Cairo, and across the nation. Meanwhile, MorsiвЂ™s supporters titled themselves вЂњTagarrodвЂќ and took to RabвЂ™aa Al Adaweya Square in Cairo and in various other locations across Egypt as well. The battle of numbers began.

Meanwhile, an attack on the BrotherhoodвЂ™s main headquarters in Cairo resulted in the death of at least five anti-Morsi protesters. Nationwide, almost 400 Egyptians were injured .

Protests continued. Tamarod announced a deadline for President Morsi to resign by 5PM the next day.

Sure enough, on that same day, EgyptвЂ™s armed forces issued a 48-hour ultimatum for Morsi to resign. Meanwhile, MorsiвЂ™s ministers started to resign from their positions and the National Salvation Front (NSF) politely rejected the militaryвЂ™s interference.

At 2AM, President Morsi rejected the ultimatum and declared that he would defend his legitimacy as elected president with his life.

This announcement was met with bloody clashes when what witnesses described as thugs and police attacked a pro-Morsi protest outside Cairo University. Twenty-three died and hundreds injured.

Tamarod and the NSF released a statement requesting that the armed forces do their duty by the people and intervene to protect Egyptians from bloodshed and instability. They declared that any rhetoric describing military protection as a вЂњcoupвЂќ is discourse that ignores the dangerous situation at hand.

Warrants were issued for the arrest of Muslim Brotherhood figureheads.

Morsi and his aids are said to be under house arrest at the Presidential Republicans Guard Club.

The biggest battle now became one of terminology. Was this a military coup , or was it – as online activists adamantly put it – #not_a_coup ?

MorsiвЂ™s supporters continued to protest for what they argued was the вЂњlegitimacyвЂќ of the deposed president. An airport was attacked in Al Arish , allegedly by Islamists. В Pro-Morsi protests across the nation were reportedly attacked including praying protesters in that same town of Al Arish.

The US government refused to refer to Morsi’s ouster as a coup, a label that would impact on the annual USD1.5 billion in aid to Egypt.

An announcement was made that Mohamed El Baradei, a Noble Peace Prize winner who led inspections of IraqвЂ™s nuclear weapons before the Invasion, was appointed as Prime Minister.

The Nour Party objected to El BaradeiвЂ™s appointment and the announcement was withdrawn .

Sources reported that Kanye West and Kim KardashianвЂ™s wedding will most likely take place at the pyramids in Egypt .

Yeah, weвЂ™re not sure either.

Soldiers attacked pro-Morsi supporters as they performed fajr (dawn) prayers outside the Republican Guard military barracks, killing 51 people and injuring almost 435 in what is being described as a massacre. Tear gas and live ammunition was used.

EgyptвЂ™s interim government promised to run an inquiry into these deaths. The military claims that a terrorist group killed one army officer and tried to storm the barracks.

The Nour Party announced its withdrawal from talks about an interim administration following the dawn massacre. Al Azhar’s Grand Imam Ahmed El-Tayyeb demanded the release of all political prisoners. He threatened to go into solitary retreat if the bloodshed continued without effort to stem it.

Interim president Adly Mansour announced a timetable for new elections despite the ongoing unrest. A committee to amend the currently suspended constitution will be formed in 15 days. The new constitution will be put to a referendum in four months’ time.В В Parliamentary elections are scheduled for February 2014, with presidential elections to follow soon after parliament is sworn in.В

As Egypt’s MuslimВ majorityВ population prepares to fast with the commencement of Ramadan on Wednesday, it remains to be seen how much longer this conflict will continue.

Ultimately, the interim government’s approach to the ongoing violence and to Tagarrod’s exercise of the democratic right to express political dissent will be telling, as the administration goes about trying to remap Egypt’s future.