A World Not Ours: Forgotten Palestinians 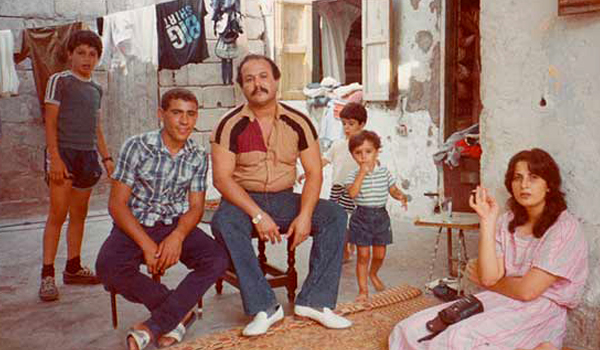 Italian, Brazilian and German flags fly over Ain el Hilweh, a crowded Palestinian refugee camp in southern Lebanon. They look out of place among Yassir Arafat’s face on small billboards and slogans praising the resistance graffitied on walls . There is an unusual energy in the streets. It is the World Cup in 2006.

Bassam, known as “Abu Eyad”, is a twenty-something year old Palestinian refugee cheering for Italy. “They once dedicated the World Cup to us. They dedicated the cup to the Palestinian Liberation Organisation (PLO), so I feel it’s my duty to support such a team.”

In A World Not Ours (2012) , Palestinian director Mahdi Fleifel, born in Dubai and based in England, follows relatives around Ain el Hilweh with a camera. The documentary and part-memoir is an amazingly edited collection of footage shot over thirty years during visits to the camp by Fleifel and his father.

Football is an escape for the people of Ain el Hilweh. As Fleifel points out, the World Cup is when the stateless are no longer stateless. They are momentarily Italians and Brazilians. It is a distraction from the fact that they have few rights in Lebanon.

The film starts optimistically because Fleifel romanticises his childhood holidays in the camp, but things look bleak in more recent footage. The strong revolutionary spirit he was used to has faded.

Abu Eyad, (nicknamed after the Palestinian Liberation Organisation’s assassinated chief of intelligence), like so many other young men from the camp, feels entrapped and forgotten. He believes Palestinian leaders sold out a long time ago. Young men kill time hanging out on the streets, sucking on cigarettes when they are not talking, and loading guns for night patrol to keep the neighbourhood safe.

Palestinians are second class citizens in Lebanon. They are barred from most professions and are restricted to a small number of blue-collar jobs. Despite the fact that many were born in Lebanon, they are not granted Lebanese citizenship and therefore cannot vote.

“They treat us like shit,” Abu Eyad says. “Have you ever heard something so despicable?”

The scenes captured by Fleifel are familiar to me. The concrete homes built too close to each other and the tangled cable lines and cords canopying the narrow alleyways remind me of my first and, so far, only trip to Lebanon. Before I started kindergarten, my mother and I visited my father’s family in Nahr al Bared, a Palestinian refugee camp in northern Lebanon. Memories of my time there remain vivid. I caught myself holding my breath during Fleifel’s scenes of the outdoor marketplace, remembering all too well how four-year-old me was overwhelmed by the stench. The interesting personalities will evoke laughter. Fleifel’s sweet but short-tempered grandfather could have been my own, and Abu Eyad’s cussing and colourful language is almost relieving to listen to because the audience begins to harbour the refugees’ frustration. The story of the Palestinian refugee is a universal one. Upon the dispossession of Palestine and Israel’s creation in 1948, half a million Palestinians were expelled from or fled Palestine. Palestinians sought refuge in surrounding countries, believing that they would be able to return to back home soon. But it has been 65 years since Nakba, and the first generation of Palestinian refugees and their descendants are still barred from returning to Palestine by the Israeli regime.

By filming the daily routine of friends and having conversations with his grandfather and mother’s uncle, Fleifel shows, in a natural and uncontrived way, what living in transience and holding onto the hope of return does to the collective psyche.

A World Not Ours highlights the sense of obligation among Palestinian refugees to tolerate their circumstances, to bite their tongues, in the hope that the right to return to Palestine is granted in the years that come.