A battle to sit through 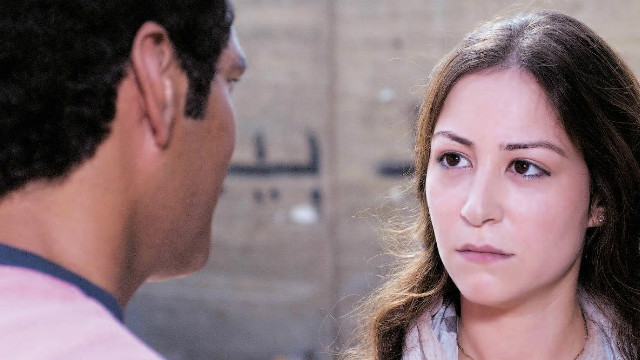 The “Battle of the Camel” was an unforgettable day for Egyptians. After the Battle, the 2012 Cannes film entry based on those events, is also unforgettable, but for the wrong reasons.

Set in dynamic, post-Arab-Spring Cairo, the film, directed by Yousry Nasrallah, already has a receptive audience secured. But unconnected scenes and a painstakingly slow, underdeveloped plot line leaves an impression of attempted artsy directing that did not quite come together.

After the Battle takes its name from the notorious scenes in Tahrir Square on February 2, 2011, when men rode horses and camels into the milling masses who stood protesting for the resignation of former President Hosni Mubarak.

The film tries to offer an alternative narrative to these events. It introduces us to Hassan (Bassem Samra), one of the horsemen who rode into Tahrir Square, through the eyes of sympathetic revolutionary Reem (Menna Shalaby).

Reem first notices an aggrieved Hassan when he is refused free fodder for his horse by a veteranian working for an NGO. It is shortly revealed that Hassan’s face was clearly identifiable through viral videos of the Battle, and that the people still begrudged his involvement in the anti-revolution attack.

After a kiss that makes no sense in the scheme of Reem’s briefly impassioned opening scene rant on women’s rights, Shalaby’s character becomes a regular visitor to Hassan’s impoverished, isolated neighbourhood of Nazlet El Sammaan.

Much to her upper class friends’ horror, Reem – a rich, educated, advertising consultant – seems taken in with the idea of an emotional connection with the illiterate horseman. Somehow, this finds her befriending Hassan’s wife and championing his children at school when they fall victim to bullying due to their father’s role in The Battle of the Camel.

Nasrallah uses the contrast between Reem and Hassan to draw attention to many social issues plaguing Egypt today. The glaring divide between the very poor and the very rich in Egypt is well portrayed, and the vulnerability of “ignorant” people like Hassan who are just trying to make ends meet to feed their families is repeatedly visited.

At one point, an activist points out to Reem that people from Nazlet El Samman are doomed to fail at breaking the cycle of poverty-induced thuggery. It soon turns out to be quite the self-fulfilling prophecy for Hassan, who sees no solution to solving his post-revolution lack of employability other than to join the weapon-toting spy network of his neighbourhood under the patronage of their richest resident.

This same patron tries to reassure Hassan, “This country will go back to exactly how it was; just without Hosni Mubarak.”

This sentiment strikes a chord in 2013 Egypt, where the people are finding Mubarak and his men increasingly acquitted by the courts of multiple charges of violence, embezzlement and human rights abuses that the revolution rose to protest against.

The chaos and economic instability of the revolution’s aftermath even induces some Egyptians to express wishes that the revolution had never occurred, a sentiment that Nasrallah reflects in Hassan’s disadvantaged neighbourhood.

After the Battle could have made for an important piece in the post-Arab-Spring jigsaw of artistic analysis, but Yousry Nasrallah flirts with too many socio-political themes without actually delving into any of them deeply enough to make a mark.

And yet, despite the hit-and-miss product, the audience is left with one spot-on conclusion about present day Egypt from the film.