The faithful fall for anything in Lebanese movie Ghadi

Amin Dora’s Lebanese film Ghadi (2013) steers away from the themes we have come to expect in Arab cinema.

Full of clever, side-splitting commentary about religious gullibility and poor community attitudes towards people with intellectual disabilities, it is a love story about a father who goes to great lengths for his son, who is ostracised for having Down Syndrome.

The film delivers a strong statement about the need to change cultural perceptions and attitudes towards people with intellectual disabilities through satire and caricaturing, and essentially urges for their greater inclusion in society.

Set in the small, fictional Christian village of El Mshakkal, the inhabitants are a mixed bag of quirky, exaggerated characters – from the dishonest, bad-tempered butcher who cannot get it up in the bedroom, the conniving enterprising barber, the ruthless gossiping women in the church pews, and the flamingly gay hairdresser Lello, to the bodacious sex worker Sophie, whose screams echo down the alleyways when she climaxes.

The villagers of El Mshakkal find primary-school-aged Ghadi (Emmanuel Khairallah) – who spends much of his time sitting at the apartment window singing, moaning and laughing – intolerable. In the village gossip circles, they shun Ghadi as a nuisance and shaytaan (devil). Amidst the scandalising chatter, word on the street is that Ghadi’s father Leba Seba (George Khabbaz), and mother Lara (Lara Rain) must have sinned to have a child born with a disability.

Narrated by Leba, the film takes plenty of tongue-in-cheek jabs at the uppity sense of morality held by the faithful. The village is full of sinners – thieves, business owners jipping customers, and breakers of many other ‘thou shalt nots’ – yet Ghadi is supposedly devilish and the bringer of negative energy.

Fed up, the villagers collude to have Ghadi and his family uprooted from the village. They want Ghadi to be sent off to an institution. While this sort of treatment cannot necessarily be generalised across broader Arab society, it does speak volumes of the vilification people with disabilities and their families face, and the lack of access to inclusive education. In a 2012 study of Iraqi constituents by Saader Al-Kindi on community attitudes towards Down Syndrome, roughly 80% of respondents believed that people with the syndrome should attend special schools. It is precisely this distancing of people born with intellectual disabilities that enables the dehumanisation of them and their families.

In true mob-like fashion, the village men draw up a petition to take to the mayor, but Leba has a plan. He exploits the sanctimonious sensibilities of the townspeople and convinces the men – half of whom are named after Saint Elias – that Ghadi is an angel who is able to answer their prayers. The ploy is bought, and fervour and fandom for Ghadi grows. He becomes something of a saint himself, and the window he sits at transforms into a shrine, a pilgrimage site, where the villagers make wishes and prayers. 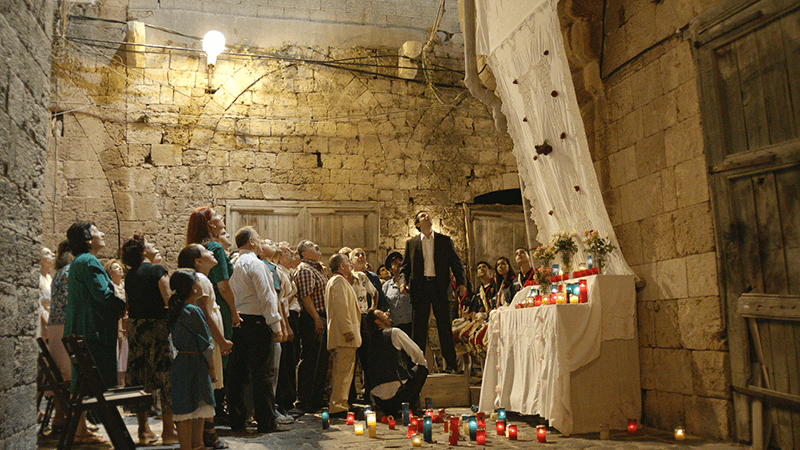 The film double-handedly highlights the hypocrisy and naivete of superstitious and religious people, and humourously critiques Calvinist moral principles. Director Amin Dora comically critiques the laziness of the villagers’ idea that everything is pre-determined by a god. The people buy into whatever validates their beliefs, particularly if it serves them a purpose. The film portrays faith as transactional; Ghadi is only an asset, a resource, when there are promises in store for them.

Once the villagers pass on their prayers to Ghadi, Leba and a small team committed and sympathetic to the cause go out of their way to answer these prayers by pulling a few strings and taking out a couple of loans. It is one of the more subtle points being made: if you want something to happen, do what you can to make it happen. Results cannot be summoned by prayer alone.

Ghadi also goes on to highlight the ingrained sexism and bigotry in Lebanese society. Stories relating to interfaith marriages and the expectations placed on women to birth sons are played out.

The film is beautifully shot, with a particularly Amelie-like charm to it, and the on-screen presence of a young actor with Down Syndrome is all the more refreshing. The film’s cinematic execution is sharp and clean, and the settings and character interactions perfectly captures life in tight-knit Arab villages anywhere in Lebanon, Palestine or Syria.

Many stories and exchanges interlay throughout Ghadi. Despite the extensive cast and the challenge of tackling the complexities of Lebanese society, Dora manages to convey many of its idiosyncrasies in, perhaps, the most pleasant and endearing way possible.

Sajjeling is an independently-run online platform dedicated to recording and unraveling Arab-Australian stories. If you would like to contribute to Sajjeling then write to us at sajjeling[AT]gmail[DOT]com. here