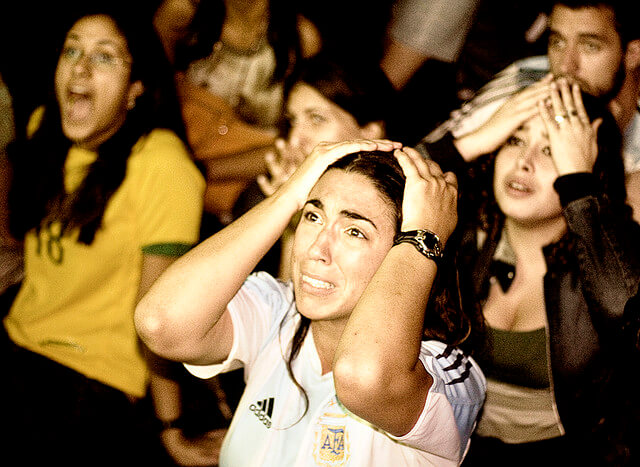 Emotions were high at the 2006 World Cup in Germany. Image: Moazzam Brohi

“I don’t understand! How can you care so much when you’re not even Spanish?”

My friend shook his head after listening to me wail about the crushing, humiliating defeat of La Furia Roja, the Spaniards, at the hands of ‘Clockwork Orange’, the Dutch.

“Explain to me why it means so much? How can it matter so much to you when there is no link between you and the country at all?”

I sighed. How to explain the love of football, especially that of the World Cup?

I can’t pinpoint exactly where my love of the World Game begun. My earliest memory is that of the 1994 games. Although I don’t remember the details, I do recall being left in front of the TV with instructions to call my dad over whenever a goal was scored. Given that I was only three, I wasn’t sure what a goal was exactly but I made a deduction that it had something to do with the reactions of people in the stand. So, anytime the stadium cheered I would rush to get my father, guessing something important had happened. Looking back, I am not sure my father thought the strategy was as impressive as I thought it was.

The following world cup – France 1998 – was celebrated with the purchase of a new set of pyjamas that was blue with soccer balls all over it. Unfortunately, there were no sets of soccer pyjamas for girls; my mother bought me a boys’ set. This was fine, except no one wanted to explain to me why there was an extra hole in the front of the pants…

My obsession after that only grew, despite the fact that everyone else in my family only cared slightly. I stuck posters with match timetable and draw on the lounge room walls. I made scrapbooks for the tournament, writing little notes about each match and cutting out all the pictures from the paper, decimating my father’s newspaper-reading ritual in the process.

In 2006, I watched every single game until my mother banned me for a night and demanded that I go to bed. Apparently a straight week without sleep was enough to make my mood positively dangerous, particularly when my team was floundering. 2010 brought the World Game to my screen right in the middle of my most difficult university exam period, and perhaps may explain the grades I received that semester. 2014, even with a full time job and despicable game times in Australia, has been no different. 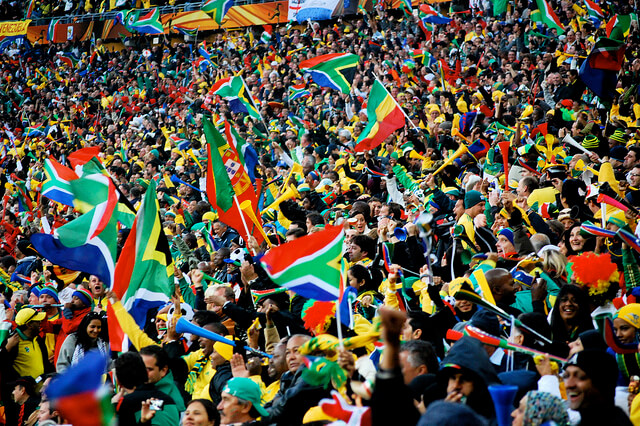 The question, however, remains. Why, as my friend asked, do I care so much when Australia always does poorly and my land of birth, Sudan, has never made an appearance? Why do I feel so impassioned about the fate of a team when, ultimately, it has no bearing on me?

I am no footballer – anyone who has seen me with a ball at my feet will confirm that – so it has nothing to do with being inspired to play better. And in the weeks of the World Cup, it is much more than ‘just a sport’ for billions of people around the world including me. Football, it seems, has its own type of magic.

It is the most popular game in the world, played on streets in every nation. It requires no gear apart from an object that is roughly round (in Sudan we used balls made out of old socks) and markings in the ground to delineate a goal. Money, pedigree and social standing have no bearing on your ability to be a great player and perhaps even make a name for yourself. It is simple to understand, and its barrier to entry is extremely low. Anyone can play and be a part of the beauty of this game.

This game is so much more than statistics. Football is ultimately about humanity.

The World Cup is a tournament that brings grown men to tears, changes the lives of rookie players and inspires generations of children to do something great. Some countries grind to a halt to watch the games. The green is a battlefield where literally anything can happen – great teams kicked out at the group stages, underdogs (like Greece and Costa Rica this year) making it further than anyone thought they could goalies and strikers alike making the impossible real. Goals can be scored right up until the last second, changing fates and creating heroes. Infamous moments are revisited for decades; Madonna’s hand of God, Zidane’s headbutt, that-one-English-win-in-1966. 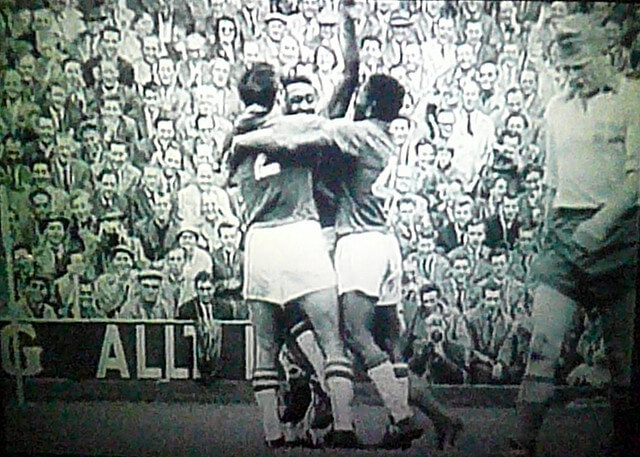 Brazil celebrates a goal against Sweden in the 1958 World Cup. Image: Eduardo Zarate

Football is the great equaliser.

Yet, the World Cup is also a tournament that unites in defeat. 31 of the 32 teams that travel to Brazil this year will experience it in some form, whether it is crushing, like that of Spain, or hopeful, like Australia’s defeat against the Dutch. If there is one emotion we can all share, it is the commonality of World Cup heartbreak.

That’s what it’s about, right? At the end of the day, football and the World Cup are about collective emotion and teams that are vessels for the hopes and dreams of nations. The beauty of this game beyond the field is that it expresses an emotion shared right around the world. It allows us, no matter our heritage, to feel part of something huge, and taps into the reptilian part of our brain that wants to belong, to have a tribe. The World Cup makes us all one people

Scottish footballer and former manager of English club Liverpool, Bill Shankly, said it all for me.

“Some people believe football is a matter of life and death. I am very disappointed with that attitude. I can assure you it is much, much more important than that.”

Yassmin is a mechanical engineer, writer, blogger, and petrol head who serves on various state and federal councils and currently works as an engineering specialist on oil and gas rigs. At sixteen, she founded Youth Without Borders, an organisation focused on enabling young people to work for positive change in their communities.

In her spare time, she enjoys reading, having a yarn, football (Liverpool FC!), Formula 1, boxing and is currently saving for her first V8.