The real housewives of the Arab world

Ever wondered how the privileged, powerful,wealthy Arabs live?

Well, it looks something like this: grand mansions with carefully manicured gardens overlooking glimmering blue seas, interiors more intricately designed than some mosques, respect from everyone in the country and, well, a whole lot of dissatisfaction. 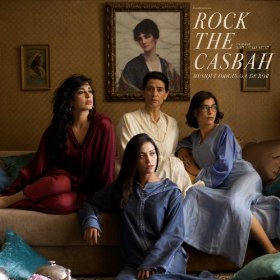 This is the Real Housewives of the Arab World according to Rock the Casbah, an Arabic language film recently screened at the Sydney Film Festival. The film captures the three days following the passing of a wealthy Moroccan entrepreneur as his three daughters reunite in his glorious Casablanca palace and suffer a lot of emotional distress, not because their father died – the story clarifies that he was an arsehole – but because their lives are just so difficult and burdensome. Leila Marrakchi, the writer and director, uses the film to unveil the dirty secrets that shadow the lives of the Middle East’s 1%, and yet – still somehow – manages to end the film with a broad statement on Arab society in general despite the story’s focus on the privileged elite.

Complete with blue skies, green lawns and extravagant fountains, Rock the Casbah is a visual pleasure, and the essence of Morocco bursts from the colours, clothing and sights.

The film is divided into three parts: the day of the three daughters’ reconciliation, the day of the father’s burial, and the following day. Three daughters, all different; a sheltered, religious teacher, an unhappy, alcoholic trophy wife and the one who ‘got away’ – the independent one, with a mind of her own – a famous actress living in America. All three are unhappy. But the ‘independent’ one? She’s the most in control.

In Marrakchi’s portrayal of the two ‘not in control’ sisters, she shows the willingness of Arab women to hand over their lives for somebody else to plan out, never realising their potential or dreams. While the alcoholic trophy wife is drinking to forget how she has wasted her life, the sheltered teacher is happy in her bubble, not willing to question her situation. Over the course of the three days you come to the (not so shocking) realisation that wealth brings a whole host of other problems – secrecy, pride, and keeping up appearances. Marrakchi takes these themes to the extreme in her commentary on the failures of Arab society. Perhaps too extreme, but I’ll leave that for the viewer to decide.

If you’re after a chick flick that has some substance, great scenery and beautiful girls drinking the least frothy Heinekens I’ve seen in my life then Rock the Casbah is the film for you. The dialogue is witty although at times cliche, but the cliches serve a purpose in developing the story. However, despite the wittiness, a lot of the dialogue in the film was just women discussing men, which is probably a demonstration of how a lot of Arab women live in the shadow of men. I think it would have been far more effective had the characters encouraged themselves to seek control and independence, rather than simply moan about their dissatisfaction due to a lack of control. It would have then been more likely for the film to have a positive, empowering effect on its female audience, encouraging liberation rather than simply connecting them through similar feelings of dissatisfaction and lack of control.