Hey IDF, Obama, your Ramadan wishes are not wanted 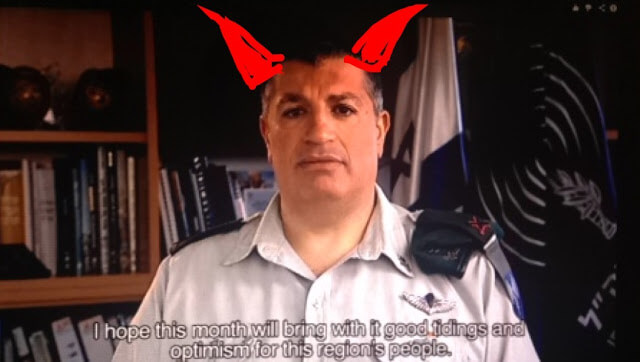 Would you like to ruin the month ahead of you in a matter of minutes? Are you keen on dry-heaving? Looking to raise your blood pressure? Then please have a listen to this Israeli soldier wishing Muslims a happy Ramadan on behalf of the Israeli Defence Force.

What’s pitiful is that not only has this man bastardised and butchered the Arabic language in a staged speech oozing with insincerity (please keep your hands off our land, hummus, language and, er, everything), but that the state of Israel continues to try to improve its image and normalise its legitimacy as an apartheid state. I wish that they would just quit being racist instead of trying to salvage something positive from the world’s increasingly negative public opinion of Israel. Pssst, Netanyahu’s administration, I’ll give you a super quick PR consultation free-of-charge: If you want people to stop thinking you lead a racist, intolerant state, then stop allowing it to function in a way that makes it a racist, intolerant state.

These publicity stunts are nothing new, but they need to be called out. It is doubly infuriating joined with Barack Obama’s recent tweet wishing Muslims worldwide “a month blessed with the joys of family, peace and understanding”, while his administration and the state kill people’s loved ones in Muslim-majority countries like Pakistan and Yemen with drones, creating more orphans in Iraq by extending the occupation and leaving it in a terrible state, profiling and spying on American Muslims, and somehow killing an American Muslim teenager after carrying out the extra-judicial assassination of his father. How are Muslims meant to have a peaceful Ramadan if you keep getting in their way with your weapons of mass destruction and seemingly legal immunity, bro?

I know what you’re thinking. Obama is all talk. You’re saying to yourself, “Just a tweet, Obs? Really, man? Isn’t there more you could do in real life to appease Muslims?” Cool your drones jets. Don’t go all ballistic imperialistic nuts. The Culturally Sensitive States of America has tailored its program of force-feeding Guantanamo Bay detainees on hunger strike by force-feeding Muslim prisoners after sunset during Ramadan.

The tokenism in the IDF clip (which, essentially, is an anti-Hezbollah message paraded as Ramadan blessings), along with other interfaith token gestures involving Palestinians and Israelis, is damaging because it perpetuates the imagined narrative that the Palestinian/Israeli ‘conflict’ is a Muslim/Jewish one with religious roots. This isn’t about Allah or Yahweh or Jesus or Isis or Zeus or David Bowie or the Flying Spaghetti Monster. This is about the annexation of land and the control, occupation and the besiegement of a people. Palestinian Christians, Druze and others suffer the same fate as Palestinian Muslims.

The IDF propaganda clip shows Israeli soldiers while handling Palestinians at checkpoints, and one of them is holding a young Palestinian girl and smiling at her. Aww! If only there had been a rainbow somewhere in the background to really tie that moment together! Imagine, though, with the added difficulty of fasting without food or water during Ramadan, Palestinian Muslims rising exceedingly early and returning home exceedingly late for Iftaar because of the hours it takes to pass through crowded checkpoints? But, hey, there is always a bright side. I suppose Palestinians in Gaza might find the calorie count limit imposed on them by Israel a bit more tolerable than usual this month.

Those who think that Palestinians and the state of Israel are on equal footing (how cute) will probably find the clip a sweet and helpful initiative. That is because they, especially the Uncle Toms of Arabs and Muslims, do not feel affected or moved by the status quo, and even reap from it. They live on a high of fuzzy warm feelings created by wilful ignorance. They are the sort of people who believe calling out severe injustice is “unhelpful”, which roughly translates into: Ugh, stop disrupting my life with reality.

Israel continues its ethnic cleansing of Palestine and systematically discriminates against Palestinians within the Occupied Territories and the rest of Palestine, now claimed as “Israel proper”, but still wants to maintain the moral high ground. And what better way to divert people’s attention from the colonisation of Palestine than by whitewashing (“happy Ramadan guys!”), pinkwashing (“we’re not bad because we love gay people!”), and greenwashing (“look at this tech we’ve developed! / “these trees we’ve planted!”)?