By Miran Hosny on November 23, 2013 • ( 1 Comment )
I recently had my very own surreal sitcom moment at work; the kind that lands you in Fez’s foreign shoes on an episode of That 70s Show or in Raj’s very Indian ones on an episode of The Big Bang Theory.
Like all tragedies, this tale begins with a sweet interlude. A colleague’s craving for Kazandibi, a Turkish dessert, led to her determination to experiment at preparing the dish, which led to a dilemma over where to find a range of ingredients in Sydney’s inner west.
In the true spirit of Arab generosity, I offered to pick up a specific ingredient from a Western Sydney semana(Arabic grocery store) that sold a variety of condiments. So whilst running errands with my dear mother, I purchased mastic gum in the usual semana-type, transparent, sealed condiment packet.
It was unlabelled, as they sometimes are, but I soon shrugged off my irritation at the unprofessional finish thinking that it was no biggie since my colleague obviously knew the look of what she had requested.
In that moment, I should have recalled Lemony Snicket’s words of wisdom in The Austere Academy: “Assumptions are dangerous things to make, and like all dangerous things to make – bombs, for instance, or strawberry shortcake – if you make even the tiniest mistake you can find yourself in terrible trouble.”
But the stuff of good stories is not made of following the ‘should haves’ in life. Consequently, the mother of all dramas unfolded the next day at work, when I deposited the mastic packet on my colleague’s desk on my way to lunch. She, a criminal solicitor, was not at her desk at the time so I made a mental note to send her a follow up email upon my return and left on a hunt for midday sustenance.
If I were a big enough watcher of television crime shows, warning lights should probably have been flashing by this point. After all, I’m sure I’m not the first to discover that lawyers are a paranoid bunch. But somehow, I missed the memo. And, thus, my day unfolded.
When I got back from lunch, I sent off the email to my colleague letting her know that I’d brought in the mastic as promised. Oblivious to all else, I then got stuck back into work for a couple of hours before I took my next break.
This time, my colleague was at her desk when I swung by. I asked her if the mastic gum was to her satisfaction. She looked at me quizzically.
“What mastic? Where is it?”
“It’s on your desk. I left it there at lunchtime.”
“What? Wait! Oh my God – don’t tell me –,” wide eyed and excited, she rummaged through her desk draw and pulled out the packet in question.
“THIS! Is this the mastic?” she demanded, waving it in my face.
Noting the unusual reaction I replied “yes” apprehensively, and the story came tumbling out.
Apparently, it had not crossed my colleague’s mind at all that the packet was the gum she had requested. To my surprise, she was unfamiliar with the appearance of mastic. So, being a criminal lawyer, she considered the unlabelled package with a healthy dose of scepticism and decided to entertain all the possibilities. 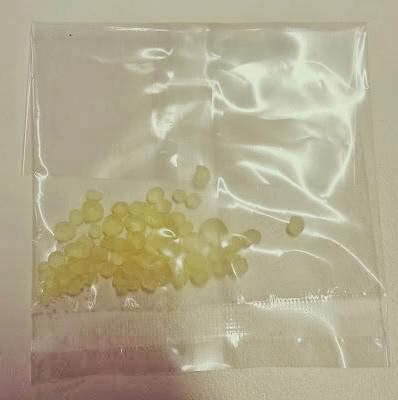 The offending gum
To get to the bottom of it, she set off asking her other colleagues whether or not they’d placed the packet on her desk. One colleague instantly went on the defensive. “What? Why would you ask me that? I didn’t do anything!” He escaped to the bathroom and was not heard from for a while after the questioning.
Another colleague helped kick off the brainstorming process.
“They look like eucalyptus lollies. Only crushed…broken into smaller pieces…like crystals. Crystals! Crystal meth – you’re holding crystal meth-amphetamines!”
Of course that notion led to suggestions that the contents of that packet could have been one of the new synthetic drugs on the black market, which led to a guessing game about whether any of the employees at work might have an illegal meth lab in their garage to put them through law school. Consequently, was this an early Christmas present to the solicitor or was it a plant to tarnish her record and implicate her in shady activities inappropriate for her position?
The paranoia came to a head when another colleague advised her to immediately hand over the package to the bosses and ensure the solicitor absolve herself of any and all liabilities whatsoever. “Just hand it in and save your skin.”
By that point, I couldn’t lift my jaw from its dropped position as I stared incredulously. She wrapped up the recount by telling me that she’d decided not to be so hasty, and so she planned to keep the packet with her until just before close of business to allow the perpetrator to show up and own up to their actions.
“It’s. Mastic. You. Asked for it.”
But it soon seemed as though I had “asked for it” when I found myself surrounded by a gaggle of lawyers laughing hysterically or peering at me sceptically upon discovering that I was the unwitting person behind all the drama.
”It’s not a drug. It’s a food ingredient! You were going to launch a work investigation over a food ingredient?”
And in true lawyerly style, my colleague replied thusly:
“Better to be paranoid than to lace my Kazandibi with ‘crystal meth’ and feed it to unsuspecting friends!”
In the aftermath of this bizarre, action packed incident, I found myself recalling a story my friend Rym had once recounted to me of a time in New York when her neighbours had called the police claiming that her family had marijuana in their home. Instead, all the police found was a bushel of molokhia, a leafy vegetable used in Middle Eastern cuisine.
Who would have thought food could cause so much legal drama?